Citrus grower Limoneira (LMNR -1.00%) provided some clarity to investors regarding its most consequential event of the year -- its lemon harvest -- in fiscal second-quarter earnings filed after the markets closed for trading on Monday. The company also adjusted full-year fiscal 2019 earnings guidance, less than a month after issuing an interim period business update and earnings revision on May 13. Note that all comparative numbers in the discussion that follows are presented against the prior-year quarter. 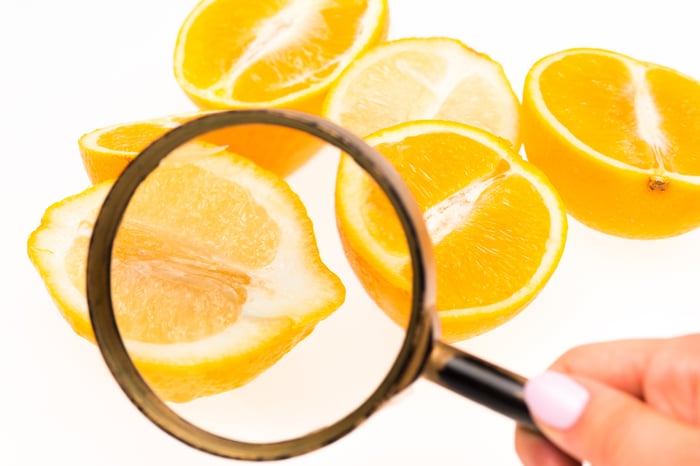 As I discussed in my earnings preview, Limoneira is currently harvesting a disproportionate amount of unusually large lemons due to heavy rains in the first part of the year. On Monday, management revealed that "the unusual larger size fruit curve currently being harvested" would continue for roughly five to seven weeks. A normal-size fruit curve is expected to return by the end of July, beyond the time frame that management had originally estimated.

A larger lemon was destined to fetch weaker average selling prices, and indeed, prices for the bigger fruit averaged just $18 per carton in the second quarter. This is well below both the company's initial projected average carton price of $26 for fiscal 2019, and its May 13 revision of $24 per carton for the fiscal year.

However, this drag on carton price is being offset somewhat by higher pricing for smaller and medium-size lemons, which garnered $30 per carton in the marketplace during the last three months.

In sum, Limoneira sold roughly 1.3 million total lemon cartons during the quarter at an average selling price per carton of $20.26, compared to 1.16 million cartons sold in the prior-year period at an average selling price of $23.42. Though marketed at a cheaper aggregate price, the higher volumes resulted in total lemon sales of $36.4 million, versus $33.6 million in lemon sales in Q2 of 2018.

Other important details from the quarter include the following:

We expect to achieve record domestic and international fresh lemon volume in fiscal year 2019, but our operational costs are temporarily higher than previous expectations due to lower fresh lemon utilization and the size of our fruit and timing of new fruit on our trees being ready for picking is hard to predict. Even though fiscal 2019 expected results have been temporarily affected by the weather, we are well positioned for solid growth and improved profitability in the coming years. Based on our organic lemon growth for next year, expected rebound in avocado revenue and all recent [lemon acreage] acquisitions coming on-line for a full fiscal year, we are very excited about our continued long-term growth opportunities.

Management reiterated its expectation on Monday that it will sell 8.4 million to 9 million lemons globally during the 2019 fiscal year. However, given pricing pressure caused by the larger lemons, as well as recent difficulties with other crops, Limoneira again reduced its earnings outlook for the fiscal 12-month period.

I've included the latest guidance (the second column in the table below) alongside the two previous projections to illuminate how drastically the full-year outlook has changed in just three months as the lemon harvesting and selling season has progressed:

While management has completely revamped expectations for fiscal 2019, investors appear to have absorbed the bad news and are apparently looking ahead: Shares of Limoneira traded as high as 6% over Monday's close at midday on Tuesday.