To put it delicately, the market for initial public offerings (IPOs) freshly listed on the stock exchange has been erratic so far this year. There have been several high-profile flops, but also a big sensation or several. It appears that CrowdStrike Holdings (CRWD -5.96%) is firmly in the second camp, based on its steep price rise during the day and the positive trading momentum the stock's showing after hours.

And although earnings season is quieting down, results are still coming in for notable companies. Two reporting after market close today were lululemon athletica (LULU -10.79%) and RH (RH -11.89%). 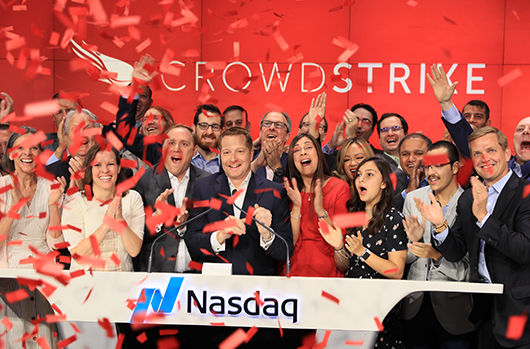 Guarding against digital threats is big business, and it's only going to get bigger.

This is probably the thinking behind the continued advancement of CrowdStrike shares after hours, following an auspicious debut today on the Nasdaq. The stock, which had already lifted its IPO price, increased by over 70% on its first day of trading Wednesday, and is currently adding a few percentage points to that rise.

Although CrowdStrike is loss-making, it has produced excellent revenue growth recently. It also has a good reputation in its market, aided to no small extent by its work uncovering alleged hacking of Democratic National Committee computer servers in the run-up to the last presidential election.

Because of that and a great many other high-profile security breaches, cybersecurity is a hot segment of the IT market. CrowdStrike looks poised to continue being a popular stock.

One of the best-performing stocks in tonight's after-party is lululemon athletica. This is hardly a surprise -- the athleisurewear specialist reported Q1 2019 results that convincingly beat analyst expectations.

On average, analysts who track the stock collectively forecast a top line of $755 million and per-share earnings of $0.70.

In the press release unveiling the results, the company said that it "continues to see strong momentum across the entire business." It's also optimistic about the future: Lululemon's five-year plan anticipates notable improvements in the sale of men's products, online commerce, and international growth.

Lululemon's stock is trading up by almost 5%, on significant volume, in after-hours action.

Another stock doing the post-market-results rumba is RH, once upon a time known as Restoration Hardware. And it's quite the dance.

The company reported its fundamentals for Q1 2019. Net revenue climbed up by 7% to $598 million, a new all-time quarterly record. Adjusted net profit also hit a fresh high, increasing by 48% to $45 million ($1.85 per share). The average analyst projections were for only $584 million in revenue and EPS of $1.53.

RH said that "[o]ur focus on elevating the brand and architecting an integrated operating platform continues to result in our profit model leapfrogging past the home furnishings industry."

Investors clearly love this earnings report -- and the company's future prospects. RH is a star on the after-hours stage tonight, with its share price up by over 26%.