Shares of three Argentinean stocks were shooting up 10% or more in Wednesday trading. As of 3:40 p.m. EDT, the excitement has died down a bit, but banking stocks Grupo Supervielle (NYSE:SUPV) and Grupo Financiero Galicia (NASDAQ:GGAL) and electricity and gas utility Pampa Energia (NYSE:PAM) are still trading markedly higher, up 6.2%, 11%, and 11.1%, respectively. 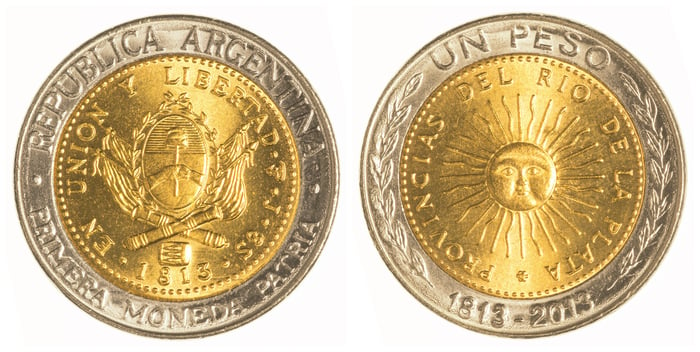 That's an excellent question. The easy answer is that Argentina's peso is on the move today, gaining about 2.5% against the U.S. dollar. Yesterday, it took 44.70 ARS to buy one USD. Today, that same dollar buys only 43.61 pesos.

It's a bit harder to figure out why Argentina's peso is getting stronger. Best guess: Today the Buenos Aires Times reported that Argentine President Mauricio Macri has chosen Senate Majority Leader Miguel Angel Pichetto to be his running mate in the country's upcoming October presidential election.

The two politicians are terming their ticket "Juntos por el Cambio," or "Together for Change," and their ticket creates an apparent alliance among the Propuesta Republicana, Unión Cívica Radical, and Coalición Cívica parties, certain "Alternative" Peronists, and now, with Pichetto's addition, the Partido Justicialista as well.

While I can't claim any special expertise in Argentinean politics, the coalition among so many groups seems calculated to shore up Macri's chances of winning reelection four months from now. As the politician is (still) considered to embody the "reform" movement in Argentina, and thus the one having the best chance of transforming Argentina back from a Peronist socialist state and into a market economy once more, markets appear to be applauding the move.

This is sending the currency up -- and sending shares of Supervielle, Financiero Galicia, and Pampa Energia up along with it.