Shares of Arista Networks (NYSE:ANET) are slightly lagging the market year to date after losing 21.7% of their value last month. Failure to find sufficient new, short-term growth from cloud titan customers such as Amazon.com, Facebook, and Microsoft (NASDAQ:MSFT) has some Arista investors hitting the panic button. 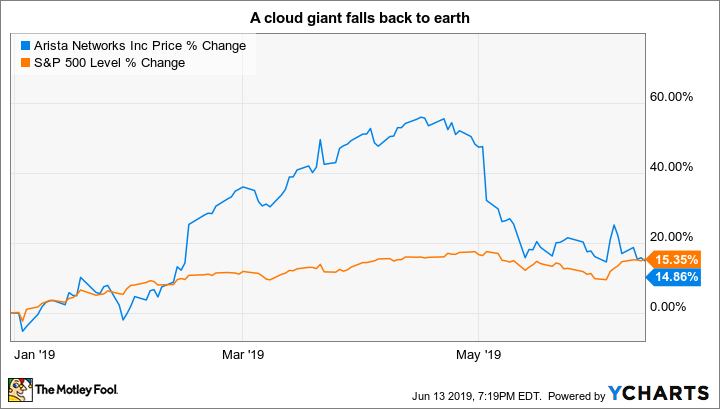 Sellers aren't giving Arista nearly enough credit for its positioning and relationships with customers that have long been its bread and butter.

You wouldn't know that from the numbers. First-quarter revenue grew 26% year over year versus 40.8% in last year's Q1. It was also the third consecutive quarter in which revenue growth declined sequentially and the fourth in which Arista failed to boost revenue by at least 30%. The Arista story appears to be deteriorating, so it's natural for some sellers to jump ship.

And yet it's not that simple. Arista is in a complicated business with multiple moving parts, so trying to define its relevance by the ebb and flow of replacement cycles in data center infrastructure is unfair. Here's how CEO Jayshree Ullal described the issue with its biggest customers in the May 2 conference call with analysts:

We saw less than the normal order strength in late March and the month of April... the massive cloud titan providers [orders] fulfilled in 2018 have led to a period of absorption in the first half of 2019. In particular, 1 cloud titan has placed most orders on hold for Q2 2019.

Translation: We work side by side with the biggest names in the cloud to make equipment that fits their needs. One of those companies is telling us they'll delay some purchases they'd planned so it's going to take a while to collect that revenue.

Why it's a mistake to see this as a miss

We can't know for sure which cloud titan is delaying orders, but to presume those days equate to an exploitable weakness that's bound to reappear quarter after quarter is a mistake. Arista's relationships are too strong. Case in point, the photo below, tweeted on June 6, shows Microsoft CEO Satya Nadella joining Arista's five-year IPO celebration. 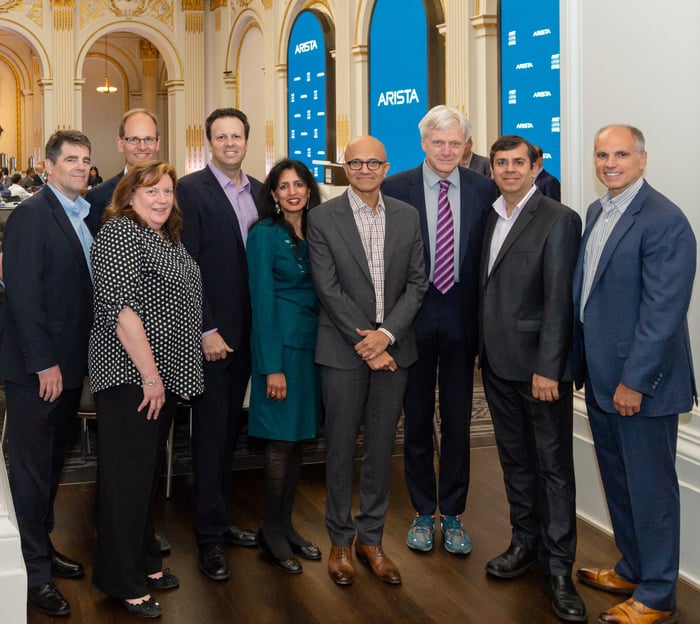 Talk about sending a message. Analysts had been speculating that Microsoft was the cloud titan delaying orders. It took Arista a month to first announce a new expanded partnership for cloud networking on Microsoft Azure. Two days later, Nadella joined Arista for its five-year party.

And why not? Gartner forecasts public cloud services revenue growing 17.5% this year alone and then growing another 50% in the ensuing three years -- to $331.2 billion worldwide by 2022. Microsoft is jockeying to seize an outsized portion of that revenue; Arista is a key partner in that effort.

To put a finer point on it, Arista is increasingly providing the engines that allow the public cloud titans to serve a large and insatiable market. Massive growth won't come in a straight line, but it will come again. Expect the stock to respond when it does.