Please ensure Javascript is enabled for purposes of website accessibility
Log In Help Join The Motley Fool
Free Article Join Over 1 Million Premium Members And Get More In-Depth Stock Guidance and Research
By Dan Caplinger - Jun 17, 2019 at 11:32AM

Wall Street was in an optimistic mood on Monday morning.

The stock market began the new week on a positive note, as stocks generally rose on Monday morning. Investors seemed ready to look forward to key decisions from the Federal Reserve and other central banks across the globe, with many hoping for more accommodative monetary policy that could spur economic growth. As of 11:15 a.m. EDT, the Dow Jones Industrial Average (^DJI -0.82%) was up 56 points to 26,145. The S&P 500 (^GSPC -1.58%) climbed 7 points to 2,894, and the Nasdaq Composite (^IXIC -2.69%) was higher by 59 points to 7,856.

During the lull between earnings seasons, merger and acquisition activity captured the most attention on Wall Street to start the week. Sotheby's (BID) announced that it had received an offer to help it go private, while Array BioPharma (ARRY) attracted interest from Pfizer (PFE 0.17%).

The hammer drops on Sotheby's

Shares of Sotheby's soared 57% on Monday morning after the auction house announced that it had agreed to an acquisition bid. BidFair USA will purchase the auctioneer in a move that will lead to Sotheby's becoming a privately held company. 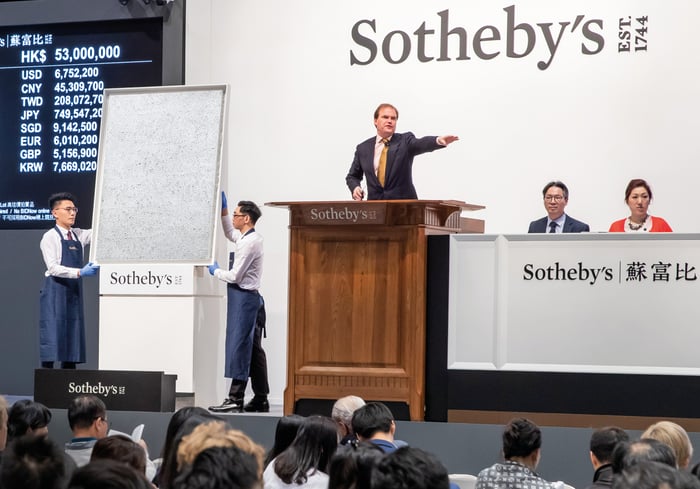 BidFair is controlled by Patrick Drahi, a billionaire investor and art collector who is best known for his founding of the cable television and media company Altice USA. Under the terms of the deal, BidFair will pay $57 per share in cash for Sotheby's, which will value the auctioneer at about $3.7 billion.

Both parties seem excited about the deal. Sotheby's CEO Tad Smith noted that the acquisition "will provide Sotheby's with the opportunity to accelerate the successful program of growth initiatives of the past several years in a more flexible private environment." As for Drahi, he seemed like he'd just won an auction, pointing out that "Sotheby's is one of the most elegant and aspirational brands in the world."

Sotheby's has gone through a lot in recent years, as fluctuations in the art and collectibles markets have presented some challenges to the company. Yet even with the big premium to its share price recently, Sotheby's will still leave some investors disappointed that they won't be able to participate more fully in a potential rebound for the auction house.

Meanwhile, shares of Array BioPharma also jumped higher, skyrocketing 56% as shareholders digested an acquisition bid of their own. Pharmaceutical giant Pfizer decided to make a big pitch for the cancer treatment specialist, offering $11.4 billion to buy out Array. Under the deal's terms, investors would receive $48 per share in cash for their Array stock.

Pfizer is excited about the positive impact it believes the acquisition could have. The move will make Pfizer's biopharmaceutical business stronger and allow it to grow faster, especially in the key oncology segment, where Pfizer has a significant presence. Array will also dramatically expand the drug giant's pipeline of cancer therapies, as well as add further research infrastructure to Pfizer's worldwide network of facilities.

In particular, the two companies highlighted Array's combination treatment Braftovi and Mektovi in treating melanoma. With phase 3 trials ongoing to try to expand the indication for the combination to include metastatic colorectal cancer, many analysts see a lot of growth potential for the treatment.

For Pfizer, the acquisition will use up available cash and lead the company to raise debt, and some of those who pay attention to debt levels raised questions about whether Pfizer's bond rating would stay unchanged following the deal. Even with those concerns, though, Pfizer's stock was down just a fraction of a percent, and that suggests confidence in the buyout going forward.