Research and educational services provider John Wiley & Sons (NYSE:JW-A), (NYSE:JW.B) released fiscal fourth-quarter 2019 results on June 11. The quarter was representative of the company's efforts to expand beyond traditional professional and academic publishing into higher-octane growth areas in higher education. Below, we'll key in on details from the last three months and discuss management's expectations for the new fiscal year. Note that all comparative numbers in this article are presented against the prior-year quarter.

What happened with Wiley this quarter? 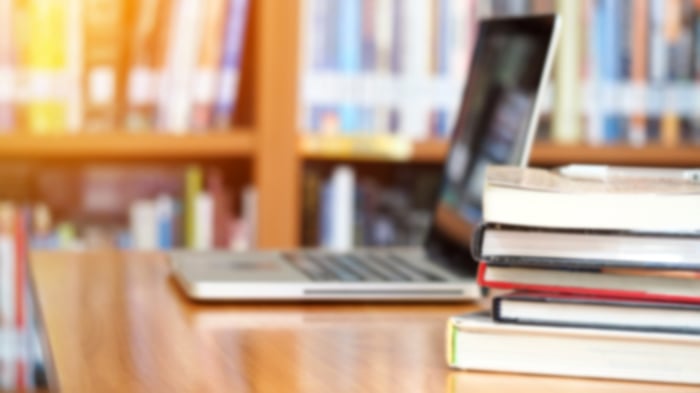 As Wiley's traditional book publishing business has declined, the company has invested excess financial returns in areas such as professional assessment, test preparation, and other services in core disciplines that can be delivered online and via mobile devices. During the company's fourth-quarter earnings conference call, CEO Brian Napack observed that Wiley is anticipating top-line momentum after a very long while:

We see revenue growth accelerating in fiscal '20, '21, and '22 after several years of little to no growth. We're seeing strong growth in critical areas of the business, and we intend to build on this momentum. We've returned some businesses to growth in fiscal '19, most notably our test preparation and cross-knowledge businesses, and the professional assessment business is growing nicely.

How will this expected revenue ramp-up influence the company's bottom line? In conjunction with cost-cutting initiatives, the effect should be positive. But as Napack explained to investors, higher profitability won't be achieved immediately:

Our multiyear business optimization program is driving significant efficiency improvement and savings across Wiley. We expect gross savings over the three-year period to be approximately $100 million, although most of that will be reinvested to drive and sustain profitable revenue growth.

As part of this initiative, we will be recording a restructuring charge in the first quarter. To achieve our goals for revenue and profitability, we must invest in growth and optimization. Therefore, we will see an earnings dip in fiscal '20 before earnings growth returns in fiscal '21 and ramps up from there.

The company expects revenue of $1.84 billion to $1.87 billion in fiscal 2020, equivalent to a 3% improvement in the company's top line against fiscal 2019, at the midpoint of the range. Adjusted earnings per share are set to decline due to amortization expense associated with recent acquisitions (most prominently, Learning House) and, as alluded to above, the investments the company is making to boost profitability.

Thus, Wiley projects that the adjusted EPS of $2.96 earned in fiscal 2019 will drop to between $2.45 and $2.55 in fiscal 2020. Note, however, that this band does not include a projected restructuring charge of $15 million to $20 million in the first quarter of fiscal 2020 related to the company's ongoing business optimization program. Management should have a tighter full-year EPS projection available in the next reporting period.