Which struggling telecom is the best bet for a turnaround?

The past few years have been unkind to wireline telecom operators like CenturyLink (LUMN -5.63%) and Frontier Communications (FTR). Both companies are dealing with multiple problems, including cord-cutting, declining legacy technologies such as landline phones, and high debt loads -- the after-effect of past acquisitions. As you can see, the trends have led to declining customer and revenue numbers, which have punished both stocks: 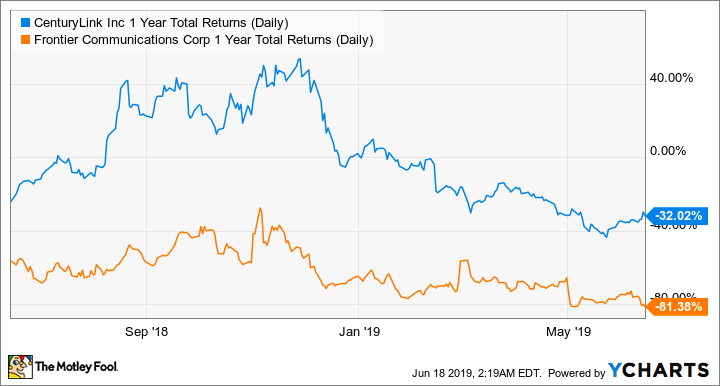 As both have declined so much, is either a potential turnaround play? Both stocks are dirt cheap by traditional equity metrics, so investors will have to parse whether either stock is a bargain or a value trap. Let's take a look at both.

CenturyLink is currently much larger than Frontier. It has 450,000 route miles of fiberoptic cable across the U.S., connecting 150,000 on-net buildings and serving 60 countries with its global footprint. After its merger of equals with Level 3 Communications in 2017, the company is now mostly focused on enterprise, international, and small business customers, which makes up about 75% of revenue, as opposed to 25% in consumer broadband, video, and voice.

Frontier is smaller, but by no means small: It serves both consumers and businesses across 29 states. However, Frontier is a bit more evenly split between consumer and commercial wireline services, with just over 50% of its business in consumer services and just under 50% in commercial services. Under current industry stresses, both companies are cutting costs and selling off non-core assets. CenturyLink, for its part, has already cut a fair amount of costs since the 2017 merger, but expects to achieve another $800 million to $1 billion in annualized run rate savings over the next three years. Last quarter, the company announced it was considering the sale of its consumer business, but would only do so if it were value-accretive.

Meanwhile, Frontier is also embarking on an aggressive cost-cutting plan, as it aims to cut $200 million over the next year in a bid to stave off declining revenue and profit. Frontier also just sold its operations in Washington, Oregon, Idaho, and Montana for $1.35 billion, which will help the company make a dent in its $16.9 billion debt load.

Both companies are challenged right now, especially in their landline phone and cable video segments, yet CenturyLink actually managed to eke out 1% broadband revenue growth last quarter, which helped mitigate the effects of lost phone and video revenue. Frontier, however, showed declines across all segments, even broadband. While Frontier's overall revenue declines were more modest, CenturyLink's retention of higher-margin broadband customers, along with merger synergies, allowed it to actually grow adjusted EBITDA even as revenue declined:

Operationally, choosing between the two companies is difficult, but CenturyLink's ability to grow broadband revenue and adjusted EBITDA puts it ahead of Frontier for me.

Unfortunately for each company, fellow regional telecom peer Windstream (Nasdaq: WIN) recently filed for bankruptcy, making the investing community very nervous about the sector. Investors should be highly aware of each company's leverage ratio and interest coverage to see if a similar fate could be possible:

On both counts, it's no contest: CenturyLink has lower leverage ratios and better interest coverage, meaning it's by far the less risky stock.

In terms of valuation, neither company was profitable on a GAAP basis last quarter, though CenturyLink would have been profitable if not for a large non-cash goodwill impairment. In fact, CenturyLink trades at just 8.6 times next year's earnings estimates, whereas Frontier is not expected to have positive earnings next year.

When assessing beaten-down and out-of-favor stocks with a high amount of risk,  it's usually better to go with a "safety first" attitude. In this case, that definitely means CenturyLink, thanks to its increasing EBITDA and much better debt situation. Frontier is far too risky.

Why Wix Stock Popped on the Market's Down Day