Many companies have suffered in the ongoing trade war between Washington and Beijing, but Apple (NASDAQ:AAPL) has arguably been among the hardest hit. After becoming the first U.S. company to surpass a $1 trillion market cap and hitting all-time stock price highs in October 2018, Apple stock had lost about one-third of its value by January 2019. It has recovered some of that loss since January (now down about 14%) but is still feeling the strain of the trade war and declining iPhone sales in China.

The first trade sanctions were imposed nearly a year ago, and with no end in sight, Apple is considering drastic steps to insulate itself -- including potentially moving some of its manufacturing out of China. 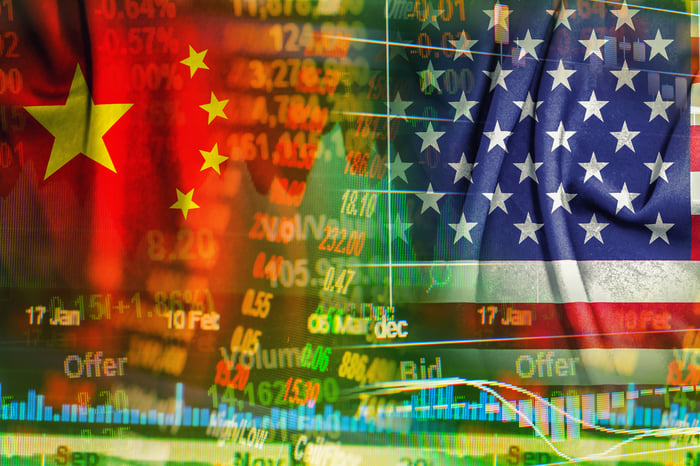 Apple has reportedly asked each of its largest suppliers to evaluate the costs to shift between 15% and 30% of its production out of China to other countries in Southeast Asia, according to a report by the Nikkei Asian Review. The company made this request to Foxconn, Pegatron, Wistron, and others, as Apple is considering a massive restructuring of its supply chain in the wake of the trade war. The events of the past year have hammered home the risk of relying too heavily on China for its production.

In May, President Trump threatened to impose another $200 billion worth of tariffs on additional products from China, after already slapping $250 billion in levies on a previous list of goods. On several occasions over the past year, the countries have alternately signaled they were nearing a deal or imposing new penalties, but neither side has yielded to the other's demands.

Hopes for a trade agreement were stoked again this week when Trump tweeted that he had a "good telephone conversation with President Xi of China," and that the two would have an extended meeting during the G20 Summit in Japan next week.

Apple's massive operations in China have taken decades to set up, so any actions the company eventually takes to relocate manufacturing facilities certainly wouldn't happen overnight. Apple has built an "extensive and complex ecosystem of components, logistics, and talent" around its operations, according to the Nikkei Asian Review report. Duplicating them will take time and money.

The iPhone maker is considering a number of countries to diversify its operations, including Mexico, India, Vietnam, Indonesia, and Malaysia -- with India and Vietnam emerging as the front-runners. Any move to get manufacturing up and running at a new location would take at least 18 months once a site has been chosen.

Moving even just a portion of its manufacturing would be a costly step, both for Apple and for China. Once the wheels are in motion, there may be no going back. Apple employs about 10,000 Chinese directly and an estimated 5 million jobs in China rely in some way on the company, so this talk of Apple moving could be a calculated effort by the company to pressure officials in Beijing to make a trade deal. In a note to clients, Wedbush analyst Daniel Ives said, "We believe this is all a poker game and Apple will not diversify production out of China overnight."

There would be some initial costs to diversify its manufacturing, but, over the longer term, the company would benefit from not having all its eggs in one basket.