The lottery proves that of the many things Americans don't understand, probability ranks near the top. People buy lottery tickets with the idea that somebody has to win -- and that's true, eventually, somebody wins, but the odds are staggeringly bad.

You have a 1 in 292,201,338 chance of winning Powerball and 1 in 302,575,350 odds of winning Mega Millions. You're more likely to get attacked by a shark, killed by a vending machine, be elected president, be struck by lightning, come down with the plague, or be killed by a falling coconut, according to a recent Motley Fool article. 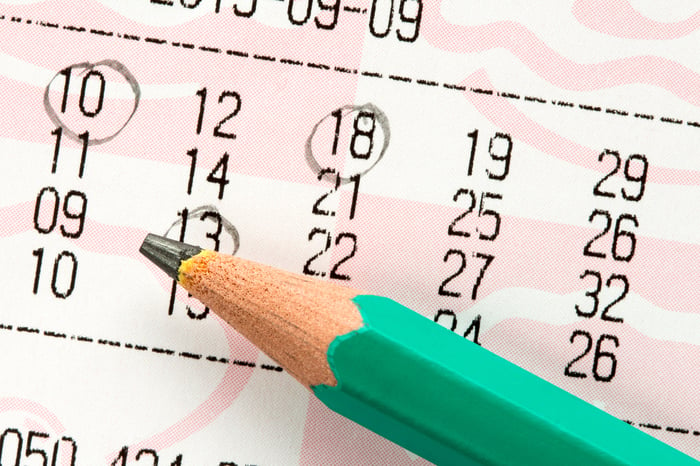 The odds of winning the lottery are pretty much zero. Image source: Getty Images.

Which state spends the most?

In Massachusetts, it wouldn't be unreasonable to put a scratch ticket on the state flag. Citizens of the Bay State spent an average of $737.01 on lottery tickets in 2017. That's the most by a whole lot as Rhode Island came in second at $502.01. And, to put the Massachusetts number in perspective, it's nearly 2% of the average annual household income in the state.

Due to its population size, Massachusetts did not generate the most income from the lottery of all 50 states. That honor goes to New York ($8.3 billion), followed by California ($6.2 billion), and Florida ($5.8 billion).

Overall, Americans spent an astounding $71.8 billion on the lottery in 2017. That's more than what was spent on video games ($43.8 billion), movies ($11.89 billion), and concerts ($8 billion) combined, according to data provided by LendEDU.

This is a terrible idea

Lottery tickets aren't an investment. They're a waste of money that could be better spent elsewhere or saved. The problem is that saving $500 or so dollars a year is a very long-range plan. In fact, as the Motley Fool's Sean Williams pointed out, investing $250 yearly in the stock market over a 20-year period will earn you about $12,000, assuming the market equals its historical returns.

That's $12,000 instead of, well, nothing, because the odds say you're going to lose if you buy a lottery ticket. And, let's forget the sensible idea of saving this money and think about all the things you could buy with it that would be better than throwing the cash after a senseless dream.

That $250 gets a family of four access to a night at the movies roughly four times. It buys a really nice anniversary dinner or tickets for two to many of the big-ticket concerts (albeit maybe not in great seats).

Playing the lottery isn't a harmless activity. In many cases, it's people wasting money they need elsewhere. It's easy to see a dollar or so a day as not that much. In reality, dollars pile up. If you do put your money to work for you by investing it, you'll have a much better chance of fulfilling your dreams then if you throw it away chasing a near-impossible dream.