Shares of graphics chip specialist NVIDIA (NASDAQ:NVDA) popped 5.4% on Tuesday after the company and AB Volvo (NASDAQOTH: VOLVY) announced they were teaming up to develop self-driving commercial trucks, buses, and industrial vehicles for a wide range of applications.

That brings NVIDIA stock's year-to-date 2019 return to 14.9%, which slightly trails the S&P 500's 17.5% return. Nonetheless, due to challenges in its gaming and data center businesses, the former market darling's stock price is still just a bit above half of its all-time closing high of $289.39, set in October. 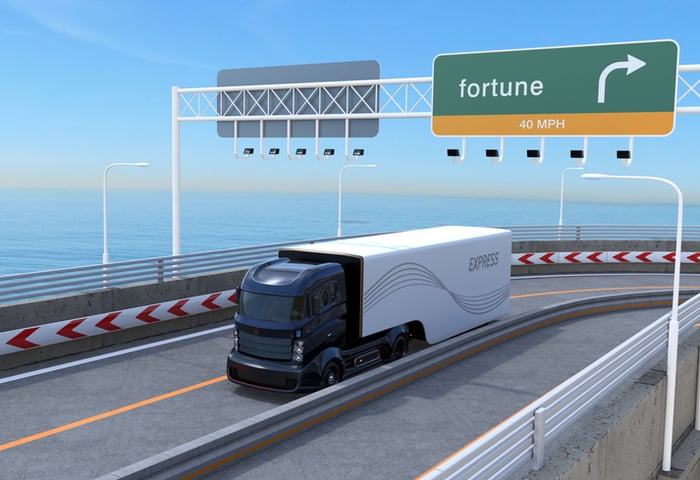 NVIDIA and Volvo said that they're partnering to develop an end-to-end artificial intelligence (AI) system to power Volvo's fully autonomous trucks and machines. They will use NVIDIA's DRIVE AI platform for training in the data center, simulation, and in-vehicle computing.

This multiyear partnership involves enabling fully autonomous driving in a wide range of applications, including freight transport, public transport, refuse and recycling collection, construction, mining, and forestry. Sweden's Volvo is a major manufacturer of a variety of trucks, buses, construction equipment, and big engines for marine and industrial applications. (The company doesn't make Volvo cars. It sold its car unit to Ford in 1999, which sold it to Chinese automaker Geely in 2010.)

"Trucking is the world's largest network -- a network that through online shopping puts practically anything, anywhere in the world, quickly within our reach," NVIDIA CEO Jensen Huang said in the press release. "The latest breakthroughs in AI and robotics bring a new level of intelligence and automation to address the transportation challenges we face. We are thrilled to partner with Volvo Group to reinvent the future of trucking."

NVIDIA's new Volvo partnership is a big win, as Volvo is the world's second-biggest maker of trucks after Daimler AG and is renowned for its focus on safety. The fact that it chose NVIDIA over its competitors suggests that it views NVIDIA's autonomous vehicle AI tech as the best and safest currently available. One can be pretty sure that Volvo popped the hood, so to speak, on NVIDIA's tech to check it out before inking the multiyear agreement.

The potential market size for self-driving trucks is massive. In 2016, in the United States alone, there were nearly 34 million trucks registered for business purposes, including 3.7 million heavy-duty Class 8 trucks. In 2017, trucks moved about 71% of all domestic freight tonnage, generating revenue of $700.1 billion, according to the American Trucking Associations.

In its most recently reported quarter, NVIDIA's auto platform's revenue grew 14% year over year to $166 million, accounting for 7.5% of its total revenue of $2.22 billion. This growth, however, pales to what appears to be on the radar when fully autonomous vehicles become legal on public roads across the U.S., which many predict will happen within five years.

In the autonomous car space, NVIDIA has formed partnerships with Toyota Motor, Volkswagen, Mercedes-Benz, and others. And its activities in the self-driving truck realm include investing in Chinese autonomous trucking start-up TuSimple.