Please ensure Javascript is enabled for purposes of website accessibility
Log In Help Join The Motley Fool
Free Article Join Over 1 Million Premium Members And Get More In-Depth Stock Guidance and Research
By Nicholas Rossolillo - Jun 19, 2019 at 8:00AM

Fried chicken is winning big with Americans. Time to cash in.

Eventually, every burger chain has to face reality. Americans love their red meat, but options are welcome. A decades-long movement that McDonald's (MCD 1.52%) started when it needed to diversify its menu in the early 1980s keeps on rolling today. Urged to reduce their consumption of high-fat hamburgers, U.S. consumers got the McNugget -- the Golden Arches' "healthier" meat option that's been a winning strategy for other burger chains as well.

Fast-forward a few decades, and fried chicken is more popular than ever. In fact, what was once a regional favorite has become the fastest-growing chain in America: Chick-fil-A. It became the third largest restaurant operator in the U.S. last year, trailing only McDonald's and Starbucks. The staggering growth of Chick-fil-A has led many rivals to add chicken, or revise its chicken options, in response. The latest to counter, or at least ride Chick-fil-A's coattails, might be Shake Shack (SHAK 3.17%).

Back in February, Shake Shack launched its own version of poultry-based finger food: Chick'n Bites. The limited-time offering is available as a six- or 10-piece meal, with a choice of either barbecue sauce or honey mustard. Chick'n Bites join the Chicken Shack sandwich -- another former limited offer that eventually became a permanent fixture -- as the second chicken item on Shake Shack's menu.

CEO Randy Garutti said Chick'n Bites have been well received. Many customers order the bites as an entree, but more importantly, some get them as an add-on. The upsell is a big deal for restaurants, as it helps with profitability on a per-location basis. For a company like Shake Shack that already does an average of about $4 million in sales per store each year, adding a popular side dish can be a great way to give a boost to what's already a very busy restaurant experience.

Incidentally, Chik-fil-A also does nearly $4.1 million in average sales per store each year -- the best rate among big restaurant chains in the industry.

It may be no coincidence, then, that in the same quarter Chick'n Bites rolled out, Shake Shack also had one of its best same-store-sales increases in recent history. Same-store sales, a combination of foot traffic and average ticket size, climbed 3.6% in the first quarter of 2019, after increasing only 1% for the full year 2018. If enough customers are adding Chick'n Bites as a side dish to their hamburger or hot dog main course, then Shake Shack has a winner on its hands. The company is forecasting full-year 2019 average annual store sales to be $4 million to $4.1 million, and same-store sales to rise 1% to 2%. 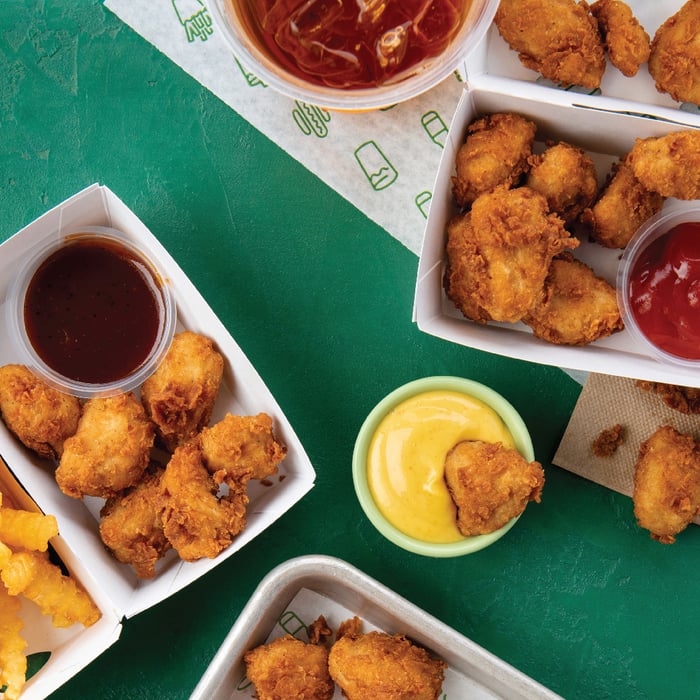 Not without some challenges

Shake Shack is still marketing Chick'n Bites as a limited-time offer, but it hasn't yet given an end date. One reason Chick'n Bites may not be worth the extra sales they're generating is the cost. CFO Tara Comonte had this to say on the last earnings call:

Chicken is a high cost item in our basket, particularly the high-quality, fresh, hormone- and antibiotic-free supply that we insist upon. In the first quarter, the combination of adding a high-class item to our basket and the corresponding promotional pricing caused an increase in our food costs and was the most significant contributor to our overall COGS [cost of goods sold] deleverage. As we continue to test Chick'n Bites, we'll see this pressure lessen with the new pricing naturally rolled out combined with supply chain improvements we're making during this current quarter, which will result in cost efficiencies going forward while maintaining all our stringent quality requirements.

Put simply, adding another protein option is expensive. COGS rose 41% during the first quarter, easily surpassing the 34% growth in total sales. Not all of the COGS increase came from Chick'n Bites -- some of it came from packaging for delivery and pick-up, as well as higher beef costs -- but Comonte said a significant amount of the increase came from the new item. If expenses don't moderate or sales don't increase enough, the bite-sized chicken may need to go.

Only time will tell if Chick'n Bites become a permanent fixture, but the first-quarter results would indicate they should be. Though it's still a small chain, Shake Shack has thus far been able to create a cult-like popularity to rival the one Chick-fil-A has built over the years. A fried chicken side-car option could help that success continue.