Industry headwinds haven't yet abated, but management has tangible reasons to be optimistic.

Recreational vehicle (RV) dealers continue to trim their orders to manufacturers in 2019 as the industry returns to more normalized retail purchases after a surge in business in 2018. Unsurprisingly, Winnebago Industries (WGO 0.19%) reported a year-over-year revenue decline in its fiscal third quarter of 2019 (the three months ended May 25, 2019). The company's motorized division saw a significant drop-off in shipments against the year-ago period. However, sales of towable RVs actually increased, providing some optimism around prospects for the upcoming 2020 fiscal year. As we discuss the last three months below, note that all comparative numbers are presented against the prior-year quarter. 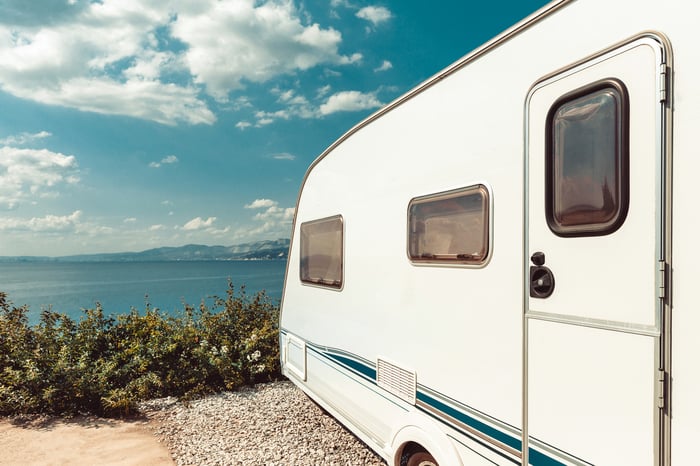 In Winnebago's earnings press release, CEO Michael Happe put the quarter's earnings into perspective by arguing that an advance in profitability helps to compensate for weaker sales as the market rebalances supply and demand:

We are pleased to deliver another quarter of solid consolidated results highlighted by continued margin expansion and market share gains. Winnebago Industries' third quarter results are a testament to the strength and resiliency of our brand portfolio amid a challenging and highly competitive RV market. We continue to focus on manufacturing high-quality products, maintaining disciplined production management and enhancing channel relationships. Despite a moderate decrease in overall sales in a difficult RV wholesale market, consolidated margin continued to expand, primarily due to the strength of our dual-branded Towable segment. We continue to be pleased with our strengthened market position as we outperform the industries in which we compete.

Winnebago avoids providing specific, detailed quarterly guidance. However, management discussed several factors in the company's earnings press release that will bear on the next few quarters. First, the manufacturer continues to expect to gain market share -- today's filing observed that Winnebago's share of the North American retail RV market now approaches 10%, up from 3% only three years ago.

Second, management asserted that the imbalance between wholesale and retail sales in the RV industry will keep normalizing during the second half of calendar year 2019. This may signal a return to sales growth in the near future.

The company expects that its Class B sales will resume their strong growth midway through the fiscal fourth quarter and into fiscal 2020. In addition, management believes that the materials cost environment across all vehicle classes will remain volatile, as Winnebago begins to feel the impact of recently enacted import tariffs in its manufacturing process.

All in all, Winnebago's perspective on the coming quarters appears reasonably optimistic, and shareholders endorsed the sanguine view: Shares traded up as much as 3% on Wednesday in the trading session following the release.

Got $500? Buy the Dip on This Beaten-Down Dividend Stock Before It Stops Dipping