Darden Restaurants (NYSE:DRI) released fiscal fourth-quarter 2019 earnings results on Thursday that capped a successful year of sales and earnings growth. The parent company of Olive Garden, LongHorn Steakhouse, Cheddar's Scratch Kitchen, and other well-known restaurant concepts also issued a forecast for the new fiscal year that its shareholders appeared to endorse, as shares rose roughly 2% in the trading session following the earnings release.

Below, we'll parse through important numbers and details from Darden's report and review the outlook for the next four quarters.

Note that all comparative numbers in the discussion that follows are presented against the prior-year quarter. 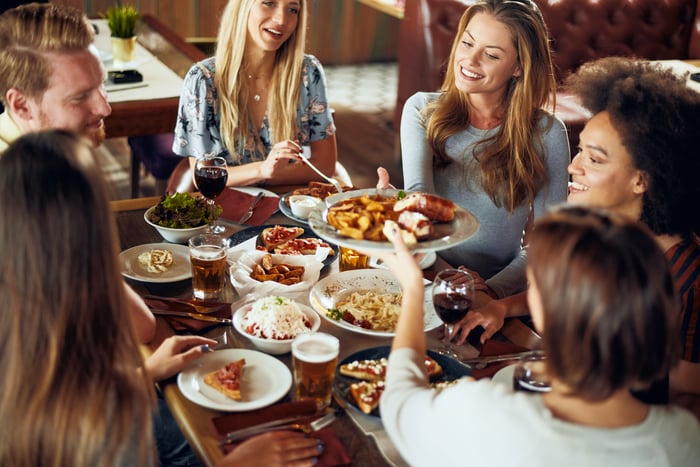 Given its mix of fast-casual, fine dining, and experimental concept chains, Darden relies as much on healthy levels of consumer spending as it does its own ability to execute across multiple concepts. During the company's earnings conference call, CEO Gene Lee discussed the current macroeconomic environment in the U.S.:

As you know, the industry experienced sales volatility during the quarter. After a good March, April was a challenging month. But the industry bounced back in May. A significant part of the volatility was due to holiday shift, which helped March but hurt April.

Our business followed the same pattern and I was pleased to see that our traffic after the industry expanded each month throughout the quarter. As we think about the consumer and look at the macro environment, the economy continues to be strong. Unemployment is as its lowest levels in nearly 50 years, wages are growing at a healthy rate, outpacing inflation and consumer confidence remains high.

Partially due to the economic outlook expressed above, Darden released a vigorous set of financial targets for fiscal 2020 on Thursday. Management expects annual top-line growth of 5.3% to 6.3%, with at least two percentage points of the expansion deriving from a 53rd week in the new year. In a similar equation to fiscal 2019, the revenue forecast relies on 44 net new restaurant openings and comparable-restaurant sales growth of between 1% and 2%.

The company's fiscal 2020 diluted EPS projection incorporates a benefit of $0.15 from the 53rd week and a drag of $0.05 stemming from new lease accounting standards. Darden is aiming for diluted EPS from continuing operations of between $6.30 and $6.45. If it hits the midpoint of this range in 2020, the restaurant specialist will exceed its prior-year earnings by 11%.