A mostly healthy performance was marred by a top line that missed its anticipated range.

Office furnishings giant Steelcase (SCS -0.13%) announced its fiscal first-quarter 2020 results on Wednesday after the markets closed. The manufacturer presented a generally positive report to investors, although customer-initiated order delays prevented it from realizing its expected revenue potential over the last three months. Note that in the discussion that follows, all comparative numbers are presented against the prior-year quarter.

What happened at Steelcase this quarter? 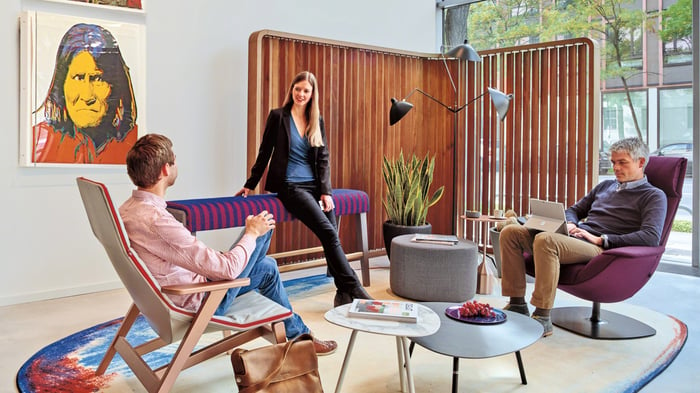 In the company's earnings press release, CFO Dave Sylvester highlighted the recent success of the EMEA segment, which is its fastest-growing division. Sylvester addressed one of investors' concerns -- namely, the time frame in which segment earnings are expected to catch up to brisk top-line growth: "We delivered strong year-over-year improvement in EMEA this quarter, with 9 percent organic revenue growth, improvements in gross margin and lower operating expenses as a percentage of revenue. Our teams remain solidly focused on achieving profitability in EMEA for fiscal 2020 and reaching a low- to mid-single-digit operating margin for that segment within the next three years."

That Steelcase fumbled on its own revenue outlook in the second quarter is a bit problematic as we look ahead. The delay in order completion requested by customers represents an external factor over which the company has little control. Management remains confident regarding its deep order backlog and "strong customer opportunities." Yet investors may proceed with caution in the next few months, at least until the company recognizes its delayed revenue in its second-quarter report.

As for the next quarter, management is projecting revenue of $970 million-$995 million, which equates to organic growth of 6%-9%. Diluted EPS is expected to land between $0.41-$0.45, compared to $0.41 in the second quarter of fiscal 2019. The prior-year period included a $7.5 million gain on the sale of property, which positively impacted EPS by $0.06. Thus, the fiscal second-quarter 2020 projection (at the midpoint) will represent adjusted earnings growth of roughly 19% if achieved.

In a signal that quarterly revenue recognition is indeed simply a matter of timing, Steelcase reiterated its full-year projection of 2%-6% year-over-year organic growth, and diluted earnings per share (EPS) of $1.20-$1.35. Nailing its second-quarter targets will help Steelcase persuade shareholders that this is indeed the case.