The ride-sharing giant has ambitious plans to send you (and your meal deliveries) zooming through the skies. But it's starting with an airport shuttle.

In a bid to address the needs of those among the city's impatient commuters who have bigger budgets, Uber (UBER 0.12%) is about to debut Uber Copter. That won't, of course, be an option for the masses, but it is part of a broader initiative through which the company aims to eventually rule the skies.

Uber Copter will launch on July 9 as a helicopter shuttle service operating between Lower Manhattan and JFK Airport. The company says it will charge an average of $200 to $225 per passenger for a one-way trip, in a ride shared by as many as five people. That price includes car transfers to move passengers to and from locations reasonably close to the two helipads. 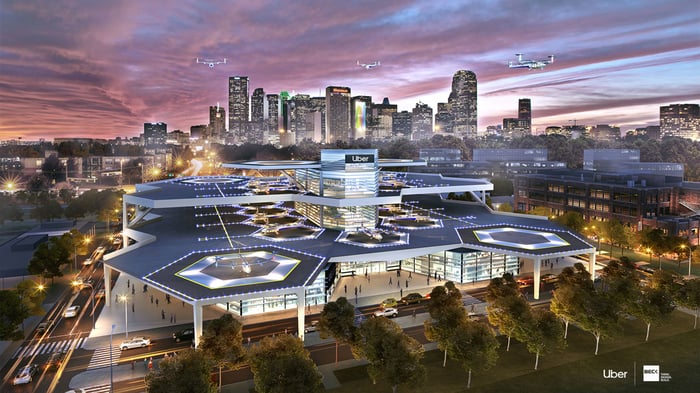 The service will operate in conjunction with Uber's partner HeliFlite, which actually owns the aircraft and supplies the pilots. Only Platinum and Diamond-level Uber Rewards members will be eligible to use it.

Uber Copter is part of Uber Elevate, which aims to populate the space above us with air taxis and drone delivery vehicles (all the better to bring hamburgers and pizza to your door). The air passenger segment of this will be called, yes, Uber Air, and its goal is to offer a viable transport option that, unlike Uber Copter, is cost-effective enough for the average person to use.

The planned Uber Air fleet will consist of electric vertical takeoff and landing propeller aircraft, which have the "hopping" abilities of helicopters but fly like planes. These will fly to and from a series of small skyports.

As with Uber Copter, the company is partnering with others on the flying machines -- it says its "Elevate Network" includes five cutting-edge aircraft makers.

Uber's timetable to get this service off the ground is tight. It plans to begin testing Uber Air in Los Angeles, Dallas, and Melbourne, Australia, next year and hopes to have the service in commercial operation in 2023.

Of course, for a ride-sharing company, the sky is simply another dimension through which to ferry paying customers. We should give Uber some credit for boldly pursuing this. As far as we know, neither archrival Lyft nor any other big ride-sharing business is doing so as aggressively, if at all.

If Uber's dreams are realized, the company could own this segment, essentially being the aerial ride-sharing provider. At that point, it won't be quick, easy, or cheap for rivals to build out their own fleets of aircraft and networks of landing places. Best of all, if Uber can pull off its goal of accessible pricing while making the service profitable, it could reap significant financial benefits.

Since Uber Air, like Uber Copter, will function largely through partnerships, the company likely isn't plowing too much investment into it. (So far, it hasn't provided any financial or back-office details of the service.) If I were a shareholder, I wouldn't be concerned about its impact on Uber's fundamentals.

Yet at the same time, this wouldn't get me excited about the company's future. There are a lot of unknowns here, not least of which is if Uber Air can scale, or how much operations will cost. Yes, it's potentially useful in big cities, but what about places with smaller populations and shorter ground commute times? A business segment operating primarily in a clutch of major metropolises might not bring in enough revenue to meaningfully impact overall performance.

Also, Uber is still struggling to make its car rides profitable. I'm not convinced it will be able to find the magic formula for profitable plane hops, which promises to be a much harder task. Perhaps mass air commuting isn't viable at all, which might be why its peers don't seem to have any interest in pursuing this segment.

Uber Air doesn't change my downbeat view of Uber. (I think it'll only continue to lose money as long as wage-earning humans are needed as drivers, and competition remains tough.) I do like that the company is thinking big and, quite literally, looking to the sky for potential growth. Whether it can draw sufficient revenue and some profitability from it is very much in question though.