Shares of the online clothing retailer were falling back as the market's enthusiasm for the recent IPO seemed to wane. Here's what you need to know.

Shares of Revolve Group (RVLV -1.56%) were moving in reverse today, after the recent IPO finally seemed to run out of gas in its post-IPO surge. There was no specific news out on the online retailer. Rather, the stock seemed to fall as buyers and sellers search for an equilibrium point, as is typical following an IPO. 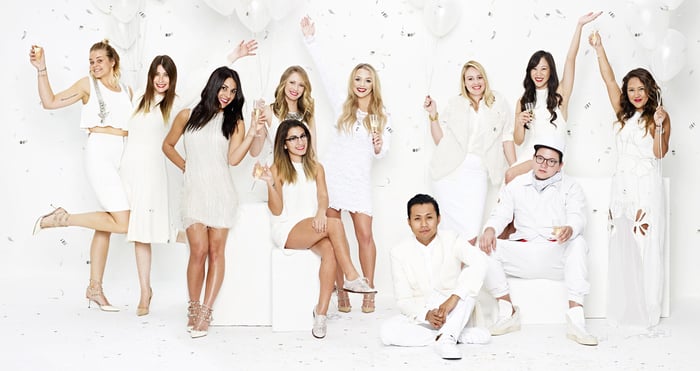 After pricing its IPO at $18 a share, Revolve Group soared on its opening day, climbing 89%, and has steadily moved higher from there, peaking at an intraday high of $48.36 on June 19. Since then, the stock has fallen over the past two days, a sign investors may believe it had been overbought, as momentum may have carried it all the way to $48.

The reversal comes after fellow debutante and highly anticipated newcomer Slack splashed on the market yesterday, perhaps stealing some of Revolve's thunder. Even after the recent slide, Revolve is trading at a lofty P/E ratio of around 90, though its profits seem to give it a leg up over most IPOs.

Not only is Revolve new to the market, but the company also has a unique business model. The online clothing retailer counts on social media influencers to drive its business as it markets specifically to a younger audience of millennials and Generation Z. Thus far, that strategy seems to be working. as the company brought in $30.7 million in profit last year and revenue grew 25% to $498.7 million. Those results may explain why the stock is still more than double its IPO price even after today's sell-off.

Investors should expect more volatility at least until the company's second-quarter earnings comes out, which won't happen for at least a month. In the meantime, expect the stock to bounce around as more investors try to wrap their heads around the next-gen clothing concept.

1 Underappreciated Growth Stock That Could Soar in 2023 and Beyond

Why Revolve Group Stock Was Handily Beating the Market This Week