Please ensure Javascript is enabled for purposes of website accessibility
Log In Help Join The Motley Fool
Free Article Join Over 1 Million Premium Members And Get More In-Depth Stock Guidance and Research
By Daniel Sparks – Jun 22, 2019 at 11:45AM

Expect huge growth both sequentially and year over year.

There's been a lot of drama leading up to Tesla's (TSLA 0.25%) second-quarter vehicle deliveries update. Some analysts have expressed concerns about demand for the company's electric cars even as Tesla asserts there's plenty of interest in its vehicles. In addition, CEO Elon Musk sent out an email about halfway through the quarter, urging employees to rally and push hard to achieve record deliveries.

Despite this recent commentary on Tesla's vehicle delivery trends, it's still not clear how many electric cars the company can deliver this quarter. Nevertheless here's an effort to peg a forecast on the key metric as the quarter comes to an end. 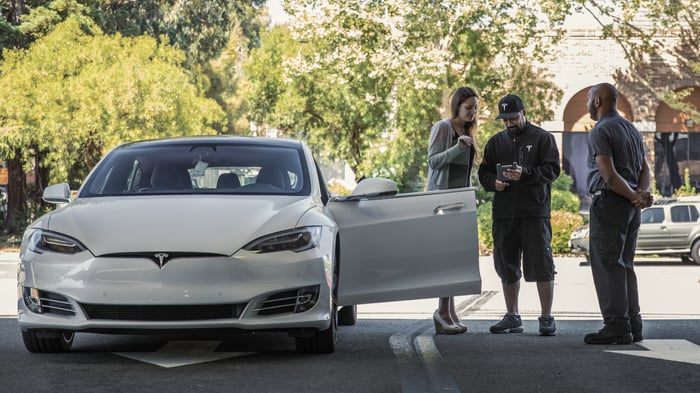 Though the exact number of deliveries Tesla will make during Q2 is difficult to estimate, one thing is clear: Deliveries will probably be up significantly both sequentially and compared to the year-ago quarter. That's because (a) Tesla deliveries pulled back sharply in Q1 and (b) Model 3 production has ramped up since the second quarter of 2018.

Going into its second quarter, Tesla management guided for second-quarter deliveries between 90,000 and 100,000 units, up significantly from the 63,000 vehicles Tesla delivered in its first quarter of 2019 but down from the record 91,000 vehicles Tesla delivered in its fourth quarter of 2018. Highlighting the uncanny growth in Tesla's business over the past year, deliveries at the low end of management's guidance would still represent 121% year-over-year growth.

There's good reason to expect Tesla to at least post deliveries around the low end of its guidance range. Musk said in a May 22 email to employees that current delivery trends indicated the company had "a good chance of exceeding" the record deliveries it posted in its fourth quarter of 2018. In addition, Musk reiterated to investors at the company's June 11 shareholder meeting that Tesla had "a good shot" at achieving record deliveries during the quarter. "If not, it's going to be very close," he added.

Tesla's second-quarter deliveries, therefore, will probably come in somewhere between 89,500 and 92,000 units. Whether they fall in this range or even slightly below it, Tesla's year-over-year growth is undeniably astounding for a company in one of the most capital-intensive industries in the world.

While the figures Tesla reports for its second quarter could potentially move the stock up or down, depending on where they fall, investors should look beyond reported deliveries when the update on production and deliveries is released.

The bigger question will be whether Tesla maintains its outlook for full-year deliveries to be between 360,000 to 400,000 vehicles. Reiterating this guidance would suggest management is confident in both production and demand for the rest of the year. And given how important higher sales are for Tesla to achieve profitability, a moderated full-year outlook could spook investors.

Tesla usually posts its production and delivery metrics within a few days of each quarter's end. In other words, investors can expect the update sometime between July 1 and July 3.