Even in the wake of a multiyear slump, there were signs that the multimedia giant would rebound.

For the better part of the past four years, an investment in Disney (DIS -2.21%) may as well have been dead money. Changing consumer behavior left many investors concerned for the future. The acceleration of cord-cutting, the increasing adoption of streaming video services, and the long-term viability of Disney's flagship ESPN sports network left many wondering about a path forward for the House of Mouse.

Recent developments have sent the stock soaring, as Wall Street has become increasingly optimistic about the company's future in the wake of Disney's successful acquisition of certain assets from Twenty-First Century Fox, its gaining control of Hulu, and the upcoming release of its branded streaming service Disney+.

That current optimism notwithstanding, there was evidence along the way that Disney's best days were yet to come, and patient investors with a long-term outlook have reaped the rewards. 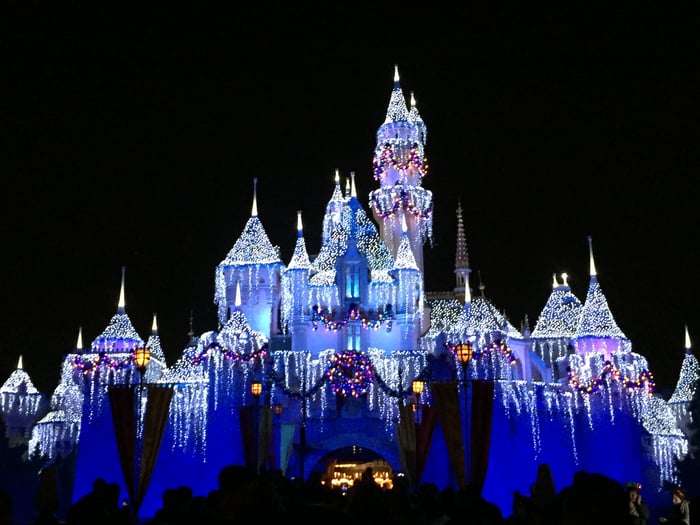 A look below the surface

Disney's revenue grew steadily, even as its stock price languished, a telltale sign of what was to come.

During the same period, Disney's revenue climbed from $48.8 billion to $59.4 billion, an increase of nearly 22%, significantly outperforming its stock price. Even more impressive was the company's net income, which grew from $7.5 billion to $12.6 billion, increasing a whopping 68%.

That wasn't the only metric that demonstrated Disney's financial strength. The company also grew free cash flow, an important measure of financial health, from $6.5 billion to $9.8 billion, an increase of 52% over the same period.

Such strong performance in the underlying business fundamentals indicate there was a serious disconnect between the financial results and the stock price.

The spark that seems to have reignited Disney's stock came in early April, when the company had an investor day to announce the details of its upcoming streaming service, Disney+. While there's significant competition in the streaming video space, investors welcomed several key choices Disney made to set apart its offering from the crowd.

First, the company made the strategic decision to price Disney+ at just $6.99 per month, or $69.99 per year, meaningfully undercutting Netflix (NFLX -0.27%), the leader in the industry. The least expensive plan offered by Netflix is priced at $8.99, but its most popular plan, which offers HD and streaming on two devices at the same time, clocks in at $12.99.

Second, Disney opted to offer significantly more content at launch than many were expecting. Subscribers can choose from Aladdin, Beauty and the Beast, The Little Mermaid, and the rest of the Disney Signature Collection, as well as the majority of Star Wars movies and Pixar films. That's not all. With the acquisition of Fox assets firmly under the company's belt, the service will also include the first 30 seasons of The Simpsons.

In all, the platform will offer more than 100 recent movies and 400 library titles and 7,500 episodes of current and off-air television series, as well as 25 original episodic series and 10 original movies -- and that's just in the first year alone.

What every investor can learn from Disney

Legendary value investor Benjamin Graham once said, "In the short run, the market is a voting machine but in the long run it is a weighing machine." Put another way, over the short term, stock prices can be more akin to a popularity contest, swayed by emotions that tend to be irrational. Over the longer term, however, the underlying business performance will be of greater significance -- eventually causing the stock price to catch up with the financial fundamentals.

This is precisely what happened with Disney, and patient investors who took the time to look beneath the surface have been amply rewarded -- Disney stock is now beating the market going all the way back to January 2015.