These three charts should help investors quickly get up to speed on the global infrastructure giant.

Brookfield Infrastructure Partners (BIP -2.23%) is one of the largest private owners of infrastructure in the world. That alone makes it an intriguing option for those who want to invest in infrastructure stocks.

If you aren't yet familiar with the global infrastructure giant, the following three charts should quickly get you up to speed on the company. 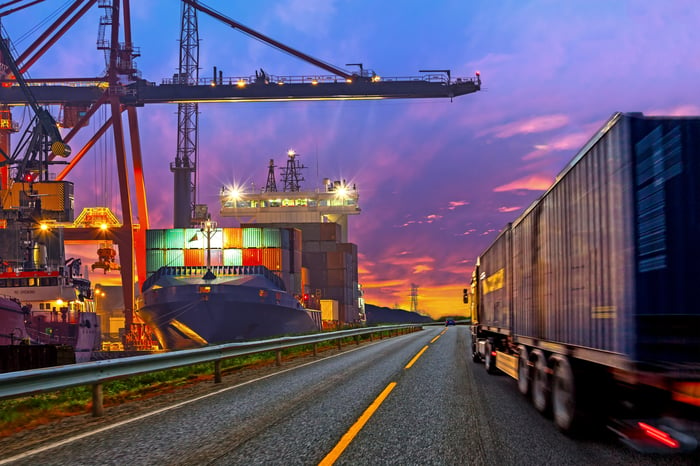 It owns a highly diversified portfolio

Brookfield Infrastructure, on the other hand, takes a much broader approach: 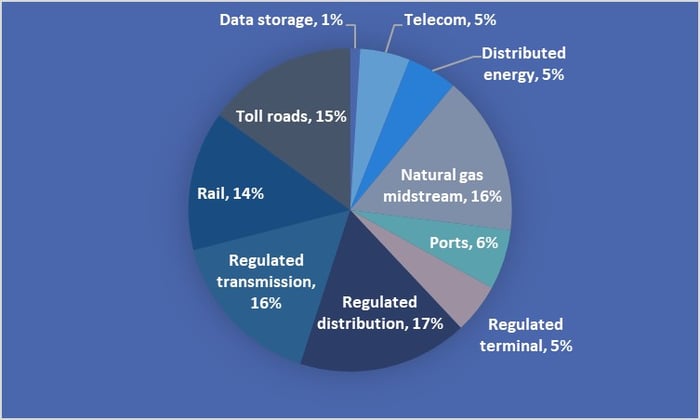 As the above chart shows, the company operates several types of infrastructure assets; these include those focused on transportation (ports, rail, and toll roads), utilities (regulated distribution and transmission), energy (natural gas midstream and distributed energy), and data (telecom towers and data storage). So it provides investors with broad exposure to the entire sector.

Furthermore, Brookfield owns infrastructure in several geographies around the world. That not only increases its diversification and its growth prospects, but also enhances its returns, since the company can take advantage of unique opportunities. For example, in 2016, Brookfield acquired a large-scale natural gas transmission business in Brazil, and won the right to build new electricity transmission lines in the country; it was able to get great deals on both transactions, due to Brazil's economic and political turmoil at the time.

Brookfield's ability to take advantage of market conditions has been one of many factors helping the company grow its cash flow at a healthy pace over the last decade: 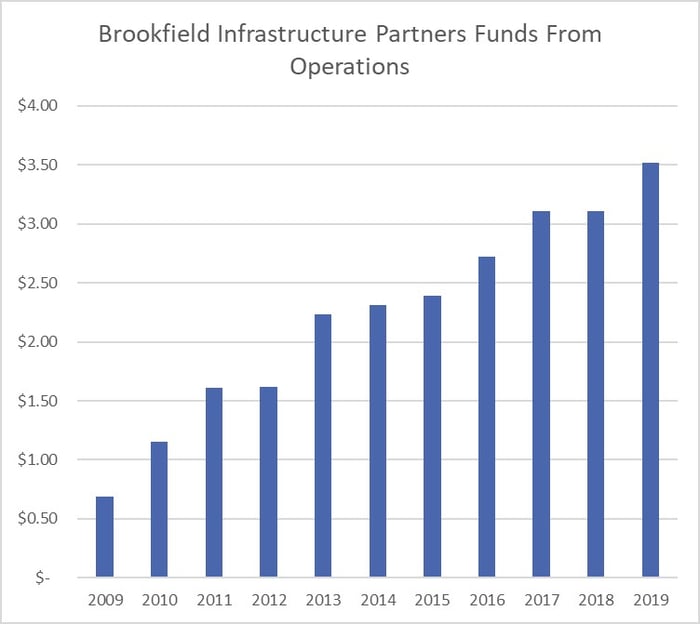 Overall, the company's cash flow per share has grown at a 16% compound annual rate since its formation a decade ago. One of the big drivers of that growth has been acquisitions. The company has made dozens of deals over the years, which it has funded through a combination of new debt and equity as well as asset sales.

Brookfield has an excellent track record of selling mature infrastructure assets and using the proceeds to buy higher-returning businesses. Last year, for example, the company sold an electricity transmission business in Chile. It's currently in the process of reinvesting that cash into six new opportunities, mainly focused on building out its data infrastructure and energy midstream platforms. Those new additions will help drive a 20% near-term increase in cash flow, while also positioning Brookfield to grow at a higher organic rate over the next few years.

It has consistently increased its distribution

Brookfield Infrastructure's steadily growing cash flow has given it the funds to increase its dividend each year since its formation: 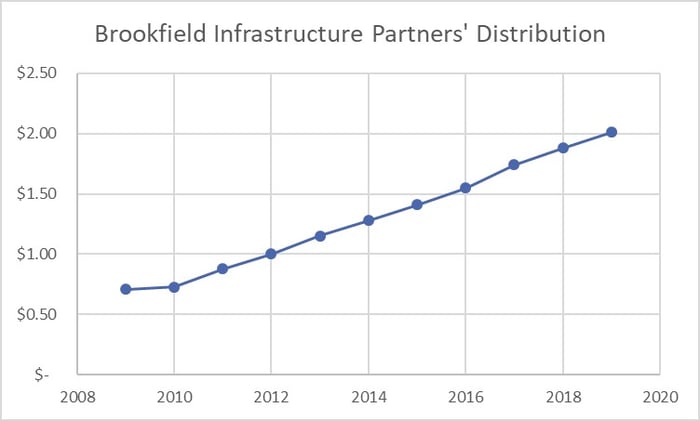 Overall, the company has grown its payout by a 10% compound annual rate over the last decade, so that it now yields 4.7%. Because the payout has increased at a slower pace than cash flow, Brookfield's payout ratio has become more conservative over the years, falling from more than 100% in 2009 to less than 60% this year.

That lower payout ratio is allowing the company to retain more cash flow, which it's using to invest in growth projects. Brookfield currently has $2.1 billion of organic expansions on track to start up over the next three years. Those investments alone should help it grow cash flow by 5% to 9% per year, which should support similar annual increases in the distribution. Meanwhile, Brookfield's ability to continue making acquisitions could enable it to grow both cash flow and its dividend at an even higher rate in the future.

A model of consistent outperformance

Brookfield Infrastructure Partners operates one of the largest and most diversified portfolios of infrastructure assets in the world. Those businesses generate lots of cash flow that the company uses to pay an above-average dividend, as well as invest in expanding its portfolio, which gives it the funds to continue increasing the payout.

This formula has worked exceptionally well over the years, giving Brookfield the power to generate a 17% total annualized return over the last decade, which crushed the 9% total return of the S&P 500. With plenty of fuel to continue growing, Brookfield Infrastructure appears well-positioned to maintain its market-beating ways.