E-commerce growth has been impressive, but the supermarket pure play is being held back by its stores.

Walmart (WMT 0.08%) surpassed Amazon.com (AMZN 3.58%) last year as the favorite destination for online grocery shoppers. Having added so many options for buying and getting groceries -- including a recently rolled out direct delivery-to-refrigerator service -- the retail giant zipped passed its e-commerce rival with 33% of online shoppers choosing Walmart, versus 31% for Amazon.

Yet in terms of actual dollar sales, Amazon is still the king, selling $8.2 billion worth of groceries online in 2018, a 12.5% increase over the year before, according to data from Edge by Ascential. Walmart was a distant second with just $2.8 billion of groceries sold, up 10% year over year. 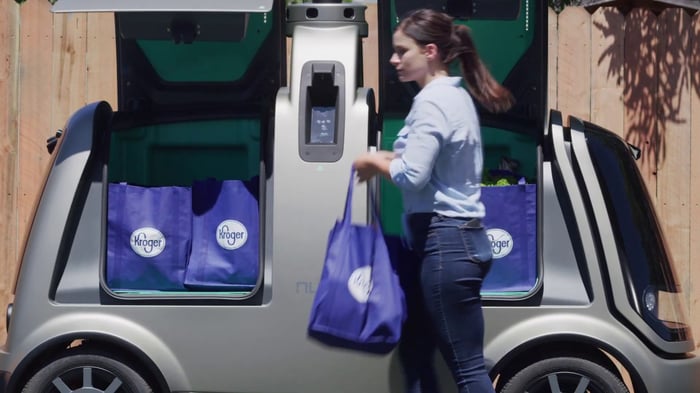 The leaderboard may not stay that way for long, however. Kroger (KR 1.51%), the country's largest pure-play supermarket chain with 2,760 stores, saw its online grocery sales surge 66% last year to an impressive $1.5 billion increase. That launched it past Ahold Delhaize (which operates supermarket chains like Giant and Stop & Shop), which generated online sales of less than $1.2 billion, only a 2.6% increase.

At that pace, Kroger could easily surpass Walmart in online grocery sales in less than two years. But can it maintain such torrid growth?

Kroger has invested a lot of money in its online capabilities over the past year, and e-commerce is becoming an essential part of its business. CEO Rodney McMullen told analysts on the first-quarter earnings conference call last week that the chain went from having no online sales at all in 2014 to an annual run rate of $5 billion in 2018, which he expects to trend toward an annual run rate of $9 billion going forward.

McMullen said digital sales grew 42% in the first quarter, and Kroger now has 1,685 order pickup locations and 2,126 delivery locations, and is able to reach 93% of its customers through e-commerce. By the end of the year, 100% of its customers should be covered.

Among the investments Kroger made was taking a 5% stake in U.K.-based, online-only supermarket Ocado. It became the exclusive user of Ocado's technology, which helps grocery stores run automated warehouses and deliver directly to the customer. It just broke ground on the first Ocado fulfillment center in the U.S., a 335,000-square-foot facility that Kroger plans to invest $55 million in. It aims to have 20 fulfillment centers, or "sheds" as it calls them, in the U.S.

Part of what has helped Kroger expand its digital capabilities so broadly has been its delivery partnership with Instacart, which began in November 2017 and was greatly expanded last fall to more than 1,600 stores. It also launched its own online grocery-delivery service, Kroger Ship, which should be fully integrated into each operational region by the end of 2019. Last year it also partnered with artificial intelligence leader Nuro for self-driving car delivery.

But despite these significant advancements in technology and capability, Kroger's first-quarter earnings report was a cause for concern. Earnings of $0.72 per share actually beat expectations by a penny, but same-store sales (or what Kroger calls "identicals") came in at an increase of just 1.5%, missing forecasts and below last year's 1.9% gain -- even though the number includes all the digital investments and gains that it made in the space.

Wells Fargo analyst Edward Kelly was pointed in his questioning of McMullen, noting that Kroger no longer beats its peers or industry data sets -- as it used to -- in comps growth. When asked what adjustments Kroger was making to change that situation, McMullen only said it had "to step up our game," and pointed to improvements in the customer experience -- not a very specific response.

The company reiterated its belief that comps will grow as much as 2.25% this year. But the slow start to the year, coupled with Walmart also reporting strong digital growth (online sales were up 37% in the first quarter), means that it will likely take more than just a couple of years for Kroger to catch up to its rivals -- even though it is gaining ground online.