Boutique airline La Compagnie has successfully taken on heavyweights like Delta and Air France with its affordable business-class service between New York and Paris.

In recent years, Delta Air Lines (DAL 1.82%), American Airlines, and United Continental and their European joint-venture partners have dominated the trans-Atlantic travel market. On many key routes, a single alliance controls a huge share of the market.

The New York-Paris route is no exception. Delta and joint venture partner Air France operate about half of the nonstop flights on this route, with six daily flights this summer. The other big carriers fly the route just once or twice a day.

Yet over the past five years, boutique French airline La Compagnie has been able to elbow its way into the New York-Paris travel market with a 100%-business-class offering. With a new fleet of Airbus (EADSY 1.69%) A321neos arriving this year, the airline's outlook is brighter than ever. I recently spoke with La Compagnie co-founder Jean-Charles Perino, who provided some additional context on how this little airline has managed to hold its own against much bigger rivals.

Entering the market with a clear value proposition

Perino said that the airline's founders thought there was room for a carrier dedicated to providing affordable all-business-class service in the trans-Atlantic market. Of course, incumbents like Delta and Air France have lots of business-class seats on their long-haul jets. But they often charge thousands of dollars each way for business-class tickets. La Compagnie undercuts its rivals with round-trip fares as low as $1,000 (and frequently below $2,000). 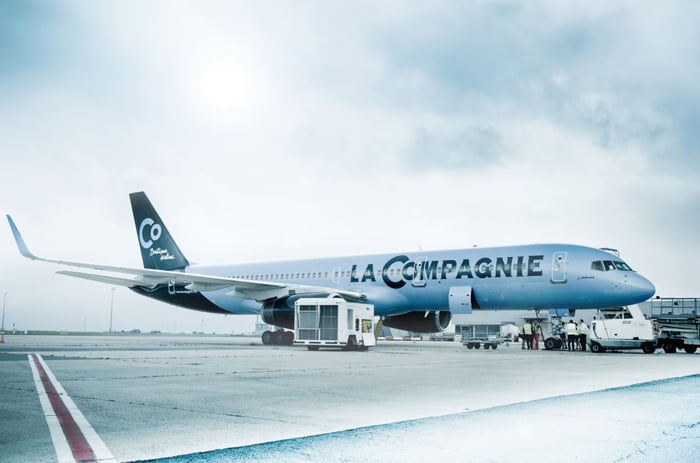 Initially, La Compagnie's service appealed more to well-to-do leisure travelers and cost-sensitive business travelers from small and medium-sized businesses. However, as La Compagnie proved its staying power -- and particularly after it added a second daily Newark-Paris flight a few years ago -- it started to get more business from larger corporations.

Today, the carrier has a balanced customer mix, with 60% of passengers traveling for business and 40% for leisure. Furthermore, despite La Compagnie being based in France, Perino noted that U.S.-based travelers account for 60% of its traffic. A growing piece of its business comes from travelers who "self-connect" by buying a separate ticket on a different airline to connect to a La Compagnie flight, either in Newark or in Paris. This indicates that many customers are willing to endure a bit of extra hassle to get an affordable trans-Atlantic ticket in business class.

An upgraded fleet will boost profitability

For the past several years, La Compagnie's fleet has consisted of a pair of Boeing 757s, each configured with 74 angled-flat business-class seats. (In other words, the seats can recline to a flat but not fully horizontal position.) The airline offers customers tablets with a variety of digital media in lieu of a traditional in-flight entertainment (IFE) system.

However, La Compagnie received its first Airbus A321neo last month. A second A321neo will arrive in September, after which the airline will retire one of its two 757s. (The other 757 also will be retired within the next 18 months, according to Perino.) 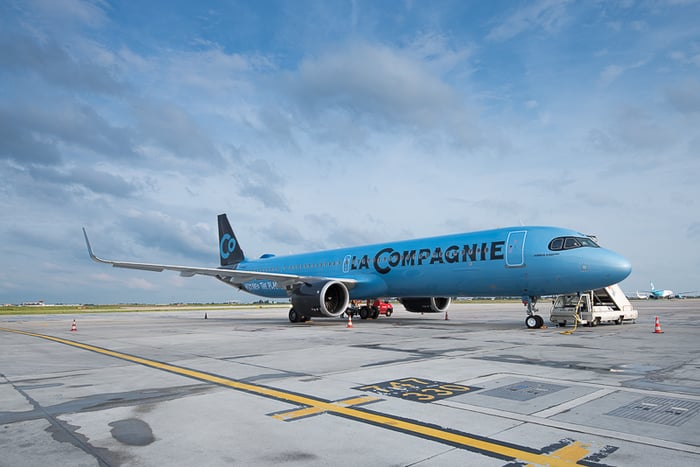 La Compagnie should be able to dramatically improve its profitability by upgrading from the Boeing 757 to the Airbus A321neo. Most obviously, it costs much less to operate the A321neo. Airbus says the new model is 30% more fuel-efficient than the 757 and cheaper to maintain.

There could also be significant revenue benefits from switching to the A321neo. For one thing, the new planes have two extra seats compared to the 757s, for a total of 76.

La Compagnie has also upgraded its product offering on the A321neos, to compare more favorably to the amenities offered by legacy carriers like Delta and Air France. Improvements include lie-flat seats that go fully horizontal (for more comfortable sleep), a built-in IFE system with 15.7-inch touchscreens at each seat, and free high-speed satellite Wi-Fi. These should help the carrier boost its average fare over time. Perino said that customers are responding well to the A321neo, but that it's too early to tell what the impact will be on average fares.

Between April 2015 and September 2016, La Compagnie flew between London and Newark, before suspending the route due to the uncertainty surrounding Brexit. Perino acknowledged that the airline might have been too quick to expand into a new market following its mid-2014 launch. Since then, La Compagnie has focused on its core Newark-Paris service.

However, the airline finally added a new route last month, introducing seasonal Newark-Nice service operating five times a week. With Delta Air Lines offering the only other nonstop flights between New York and Nice, half of the passengers traveling between those two cities were taking connecting flights. La Compagnie also saw an opportunity to grow the market and entice more travelers to opt for business-class service.

The new route is performing well, according to Perino, attracting a surprisingly high amount of business traffic in addition to leisure travelers headed for the French Riviera and Monaco.

Nevertheless, La Compagnie has no plans for other new routes in the near future. Instead, it will add a third daily flight on its core Newark-Paris route on certain days after the Newark-Nice route ends for the season. In the long run, Perino said the airline may look to expand to more cities in the U.S., as well as destinations in the Middle East and Africa.

Start-up airlines have a notoriously high failure rate. However, La Compagnie looks like it may be in a position to beat the odds. The ongoing fleet transition to the Airbus A321neo will reduce the airline's costs dramatically while also potentially boosting unit revenue. That may be enough to make La Compagnie sustainably profitable.

To be fair, La Compagnie hasn't had to survive a downturn yet. But management thinks that the carrier will be just fine during periods of economic weakness: The decline in overall business traffic could be offset by market-share gains, as business travelers look for cheaper options. Of course, there are no guarantees, but with a new fleet of Airbus A321neos and a unique value proposition, La Compagnie should be able to thrive for many years to come.

Why Delta Stock Is Falling Today
401%