Some of the drugs aren't going to survive this marriage.

Celgene (CELG) and Bristol-Myers Squibb (BMY 0.48%) were scheduled to say their official "I dos" in the coming months, but this blended family isn't starting off in Brady Bunch fashion.

Two drugs, at least, will need to be disowned to get this deal done. Sorry, Marcia and Cindy, you'll have to find somewhere else to live. 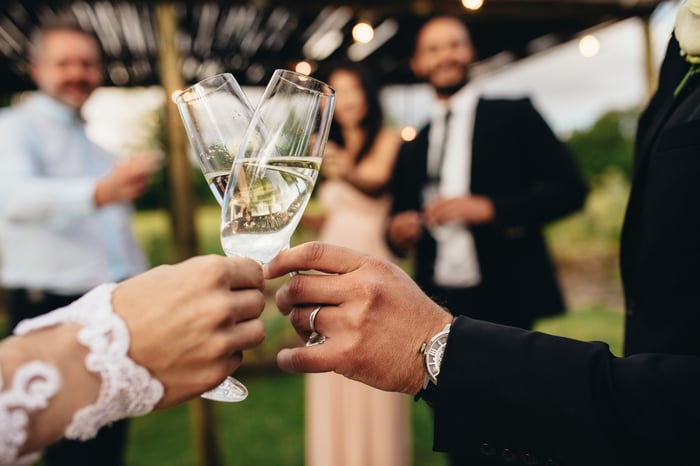 Opdivo is much further along than tislelizumab, so on the surface it makes more sense to hold on to the revenue-generating Opdivo. But longer term that might not end up being the best move since tislelizumab may be more efficacious than Opdivo.

Tislelizumab was designed to have lower binding to the Fc-gama receptor, which macrophages, a type of immune cells, use as a signal to kill antibody-bound cells. While that's normally a good thing -- think of antibodies bound to foreign bacteria -- in the case of PD-1 antibodies, the antibody is blocking a signal on T-cells, which allows the T-cell to attack tumor cells. If macrophages think the T-cells are foreign and attack them, the T-cells can't target the tumor.

Breaking the contract with BeiGene wasn't cheap, with Celgene having to pony up $150 million in alimony. Interestingly, BeiGene and Celgene will continue to share visitation rights to their other children: the commercial operations for Celgene's drugs in China, which are sold by BeiGene.

In the world of corporate marriages, the Federal Trade Commission is always standing nearby ready to stand up and object if the agency decides there's enough overlap between the two companies to stifle competition. In its review of the Bristol-Myers Squibb-Celgene deal, the FTC appears to have decided that the combined company would have too much power in the anti-inflammatory markets.

In an announcement made Monday, Bristol-Myers said the stepchild (Otezla) is the one getting kicked out of the nest. The company will look for a buyer for the drug that Celgene has guided to bring in about $1.9 billion this year, which would be an 18% year-over-year increase if it hits that goal.

Pushing back the wedding date

Disavowing tislelizumab appears to be a done deal, but Bristol-Myers will need to find a buyer for Otezla, which will push back the expected closure of the acquisition from previous guidance of "in the third quarter" to the "end of 2019 or the beginning of 2020." While it isn't a major delay, the announcement caused a decline in both companies' stock on Monday.

Celgene is down because the deal is incrementally further off and slightly less likely to be completed.

Bristol-Myers dropped because investors are worried about how much it'll be able to get for Otezla. Potential buyers of Otezla know Bristol-Myers needs to off-load the drug to meet its larger goal of acquiring Celgene, so Bristol-Myers isn't exactly in the best bargaining position. Of course, if multiple buyers are interested, the urgency may not be a major hindrance and Bristol-Myers could get top dollar for off-loading the stepchild.