Shares of NovoCure (NASDAQ:NVCR), which makes a device for treating cancerous solid tumors with electric fields, popped 19% in June, according to data from S&P Global Market Intelligence.

NovoCure stock's performance has been electrifying in 2019, with shares soaring 90.7% this year through July 2, versus the broader market's 19.8% return.

We can attribute NovoCure stock's strong performance last month largely to a continuation of investor enthusiasm stemming from the company's May 23 announcement that it had received approval from the Food and Drug Administration to use its Optune device to treat malignant pleural mesothelioma. As I wrote last month, "This is an aggressive and rare form of cancer primarily caused by inhaling asbestos fibers into the lungs."

Currently, the Jersey-based (Chanel Islands) company's device is used to treat glioblastoma (GBM), the most common primary brain cancer in adults and one of the most difficult types of cancer to treat. Optune is marketed for this indication in the United States and across the company's international markets, including Germany, Austria, and Japan.

There were two notable June-specific catalysts for NovoCure stock's robust performance. On June 26, the company announced that the German Institute for Quality and Efficiency in Healthcare "has published its rapid report concluding that, based on a review of Novocure’s EF-14 phase 3 pivotal trial, patients with newly diagnosed glioblastoma (GBM) lived longer when treated with Optune in addition to standard chemotherapy, without affecting quality of life." This finding brings the company a step closer to securing national reimbursement for Optune in Germany. Shares jumped 7.1% the next day.

And on June 27, Wall Street firm Oppenheimer initiated coverage of the stock with an outperform rating, driving shares to a 3.9% gain. 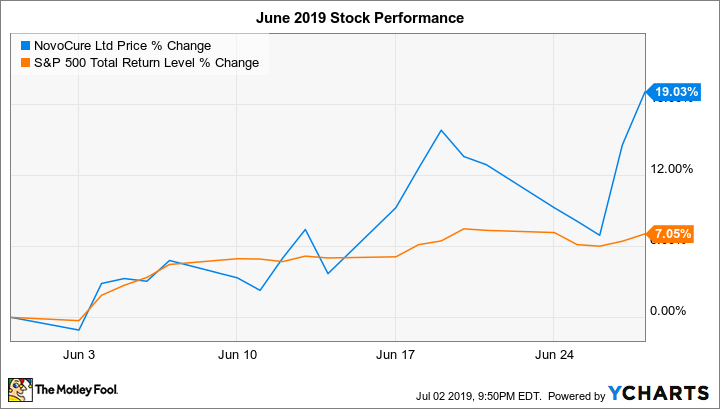 Here's the year-to-date picture, through July 2: 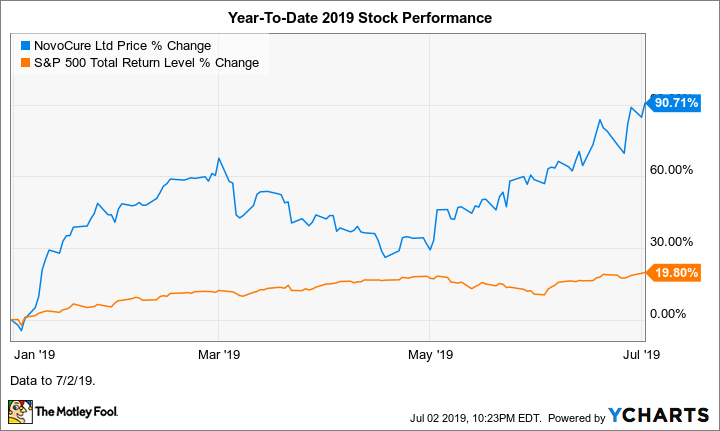 As I wrote last month, "Along with just receiving FDA approval to treat mesothelioma, NovoCure has other potential new catalysts for growth on the horizon this year. Notably, this includes a launch of Optune in China, which could approve the device to treat GBM this year, Chairman Bill Doyle said on the Q1 earnings call."

Investors don't have long to wait for some material news, as NovoCure ("novo" is Latin for "new") just announced that it will be releasing its second-quarter 2019 results on Thursday, July 25, before the market opens.