The United States economy is largely driven by consumption. While that's led to an incredible surge in average living standards, the consumer economy isn't without a few warts. Notably, the production and consumption of goods is generally a linear process. Commodities are drilled and mined, engineered into products, shipped to market, purchased, and discarded after a relatively short life.

Abundant energy and petrochemicals make it all possible, but companies are beginning to realize that a linear system of consumption isn't sustainable in the long run. Luckily, it turns out that a little R&D and a commitment to resource conservation can help to bend the relationship between production and consumption into a closed loop, thereby creating a (more) circular economy. It also promises to boost the bottom line for pioneering companies such as WestRock (NYSE:WRK) and Waste Management (NYSE:WM). 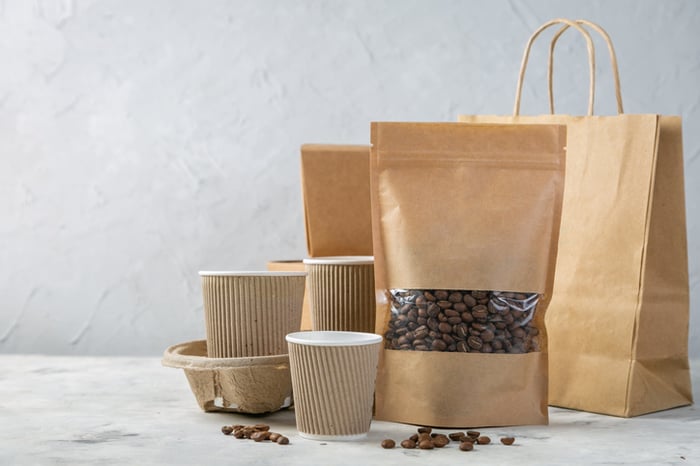 Perhaps nothing demonstrates the economy's current linear consumption model better than single-use plastics. Used in everything from packaging to toothbrushes to beverage bottles, these materials are becoming a significant environmental problem, which is exactly why personal care and consumer goods brands (and even cities and states) are increasingly turning to paper and plant-based packaging and materials.

WestRock is benefiting from the trend. For example, it developed the Cluster-Pak and EconoClip packaging products to replace shrink wrap and plastic rings, respectively, that traditionally accompany beverage containers on the shipping part of their life span. The company has also developed EnShield Natural Kraft, a grease- and oil-resistant paper that can replace polyethylene coatings typically applied to paper packaging. While such coatings make the inside of coffee cups and ice cream containers smooth to the touch and better equipped for food applications, they also complicate recycling efforts.

The business has also been tapped directly by customers to create custom packaging solutions. When Walmart launched its new razor brand, Joy, it approached WestRock to create a 100% paper-based product package that could include branding inside and out and be packed at third-party facilities without added capital expenses. Ditto for the store display. WestRock delivered -- and Joy hit the market with rave reviews.

Replacing plastic rings, polyethylene coatings, and packaging for razors may not seem like much, but it's added up to a massive opportunity for the business. WestRock has increased the number of customers purchasing at least $1 million in products from both its consumer and industrial segments from 102 at the end of fiscal 2016 to 143 by the end of March 2019. Those customers have generated trailing 12-month revenue of $6 billion at last count, which is more than one-third of total revenue in that span. As more localities and brands ditch plastic, the business should continue to be rewarded. 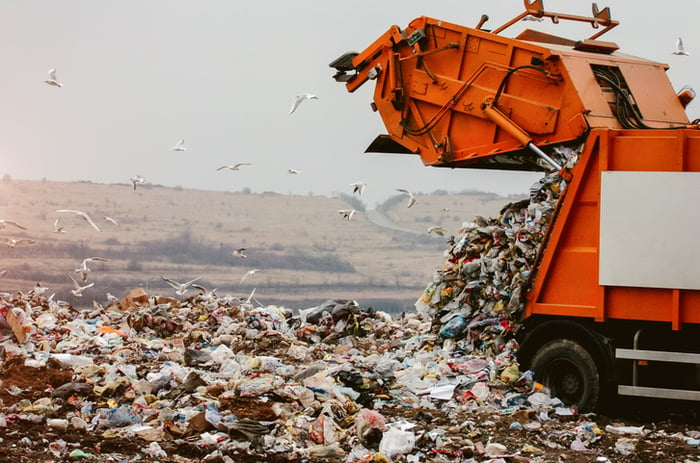 One person's trash is another's fuel

According to the U.S. Environmental Protection Agency, the United States produces more than 260 million metric tons of municipal solid waste each year. As microbes in landfills munch through that trash, an estimated 56 million cubic feet per day of methane is released. Encouragingly, landfill gases are increasingly being diverted from the atmosphere to power heavy-duty trucks, natural gas-fired power plants, and certain types of fuel cells, or they're sent through pipelines to heat buildings.

For instance, Waste Management captures landfill gases at 130 of its landfill sites, which it uses to power local garbage truck fleets or residential homes. It also shares its expertise with unrelated municipalities so they can create value from their own landfills. Taken together, the company's landfill gas programs are expected to capture enough methane to power the equivalent of 2 million homes by 2020.

The landfill operator receives a big assist from Clean Energy Fuels (NASDAQ:CLNE), which maintains the infrastructure required to capture and compress landfill gases from Waste Management into vehicle fuel. Clean Energy Fuels sold 365 million gasoline gallon equivalents of natural gas fuels in 2018, approximately 30% of which was captured from landfills, and estimates 55% of all new garbage trucks sold last year run on natural gas fuels. It doesn't get much more circular than that.

That said, Waste Management might just be getting started. The company operates 10 full-scale waste treatment landfills, which are engineered to encourage the growth of friendly microbes, accelerate the breakdown of wastes, and generate even larger volumes of landfill gases in a shorter period of time. Think of it as next-generation landfill management technology. The company thinks the systems being tested could reduce the lifespan of a landfill from 30 years to just 10 years, which might allow the business to shrink its operational footprint and boost profits -- all while helping to reduce the environmental impact of American landfills.