Chinese electric automaker NIO (NYSE:NIO) has undergone a dramatic change in fortunes this year. After its share price surged to near all-time highs in March, investors lost their enthusiasm, and in recent weeks, the stock has plumbed the lowest prices of NIO's short publicly traded tenure.

The reasons for pessimism are varied, and even though the start-up has a lot going for it, its path forward will be challenging. However, the next year could go a long way toward clearing the air about which direction NIO is headed. For investors who are willing to live with a lot of negativity -- and who don't mind extreme uncertainty -- now might be a good time to jump in.

To understand where NIO is going, let's first review to where it has been in the recent past. The electric vehicle (EV) manufacturer got off to a hot start last year with deliveries of its first mass-market ES8 premium SUV. But its deliveries have already begun to trail off.

Management has said that the slowdown in China's economy -- exacerbated by its trade war with the U.S. -- is to blame for those falling sales. That is only part of the story, though. The government in Beijing also scaled back its EV subsidies by 50% in March, and plans to phase them out further next year. Granted, the path to EV ownership in China is still much easier and usually cheaper than buying a traditional combustion engine vehicle, but the reduction in financial encouragement from the government has nevertheless been a near-term headwind. https://www.fool.com/earnings/call-transcripts/2019/05/28/nio-inc-nio-q1-2019-earnings-call-transcript.aspx?source=isesitlnk0000001&mrr=1.00 https://www.bloomberg.com/news/articles/2019-03-26/china-scales-back-subsidies-for-electric-cars-to-spur-innovation

If that wasn't enough, investors have also begun to worry about the rate at which NIO is hemorrhaging cash -- and rightfully so. During the first quarter, gross profit margin on vehicles sold was negative 13.4% (which means the company is losing money whenever it makes a sale), and net losses totaled $395 million. It hasn't come anywhere close to reaching profitable scale, and the fact that it outsources manufacturing to China's JAC Motors isn't helping. NIO's plans for its own factory (as well as its first sedan option) are on hold, so there's little visibility as to when these steep losses on its vehicles will cease. 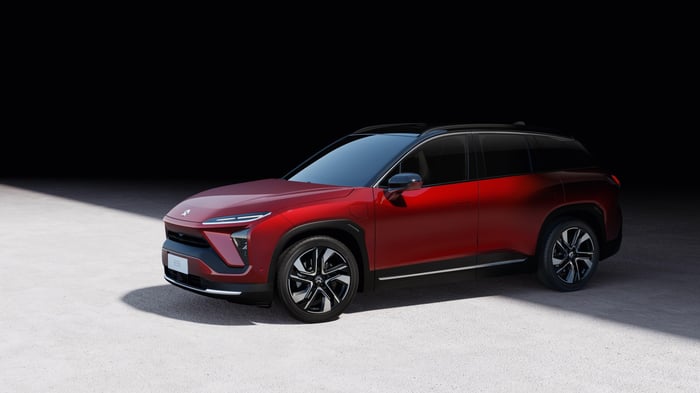 The immediate road ahead

But here's the good news: In June, NIO began delivering the ES6 -- its compact and more affordable SUV -- to customers. During the first quarter conference call, the company said it had received over 12,000 pre-orders for the ES6. That could mean a rebound in sales is right around the corner.

Though we lack details about when a NIO-owned factory might come online, and its sedan is on pause, a third vehicle option is reportedly in the works. It will be based on the ES8 platform (implying another SUV of some sort), and management said it should go into production in 2020. Given that its EV sales have been falling of late, it seems likely that driving down costs for customers is the company's primary goal right now, which would  encourage more orders and help the NIO dig itself out of the red.

Also, its efforts to gobble up market share make sense. Even as it's  cutting subsidies, the Chinese government continues to encourage people to buy EVs by keeping the associated costs low. Some forecasts estimate that by 2025, EV sales will account for about 50% of the total Chinese auto industry. (In 2018, 23.7 million passenger vehicles were sold in the country.) NIO could be in prime position to benefit from that long-term trend.

Thus, though dark clouds have gathered around this company in 2019 where there were clear skies before, in a year's time, much of the uncertainty could clear up. By 2020, NIO should have three models for Chinese drivers to choose from, and some clarity on its factory plans (and lower manufacturing costs) should be forthcoming too.

But even though 2020 looks likely to hold more promise than 2019 has so far for NIO, that doesn't necessarily mean investors should rush out and purchase shares. Only those with the stomach to endure serious volatility, and the ability to build a position in this automaker gradually over time -- so as to buy the dips on what is sure to be a wild roller-coaster ride -- should even think about investing in NIO stock.