The auto dealership operator has found a winning formula in pre-owned vehicles.

Shares of Sonic Automotive (SAH -8.38%) soared 69.7% in the first half of the year, according to data provided by S&P Global Market Intelligence.

Sonic is one of the largest auto retailers in the country, but sales haven't grown much in recent years, and neither have earnings. This is why the stock typically trades at a low valuation; it entered the year trading for less than 8 times this year's consensus earnings estimate. 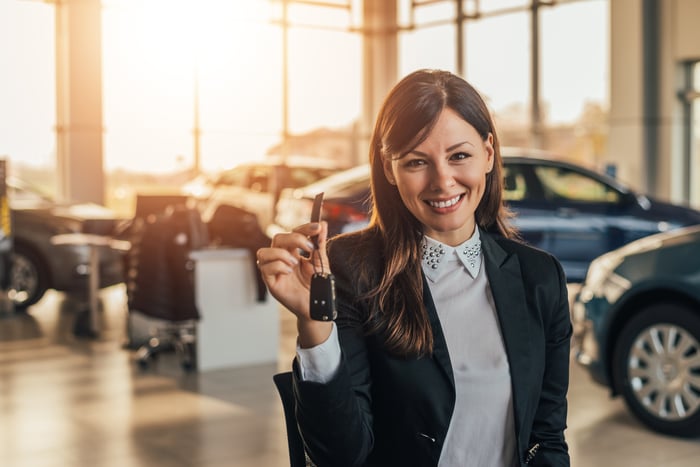 However, investors quickly saw a bargain and sent the stock higher after Sonic's first-quarter earnings report showed its EchoPark pre-owned vehicle chain is growing by leaps and bounds and could significantly improve the company's profitability.

EchoPark generated revenue of $249.6 million in the last quarter, marking an increase of 90% year over year. It's a small but fast-growing chain that accounts for only about 10% of the company's total revenue, but management said EchoPark is on track to bring in more than $1 billion in revenue this year.

Auto dealerships are extremely competitive, which is why Sonic generates razor-thin margins. The company's total net income last quarter was only $42 million on about $2.4 billion in total revenue. But EchoPark's successful formula of delivering what the company describes as Costco-like deals for car buyers could significantly raise Sonic's growth profile.

Not only is the pre-owned chain growing fast, it became profitable for the first time. EchoPark generated a profit of $0.2 million before taxes last quarter. That doesn't seem like much, but consider that EchoPark is quickly scaling, generating 28.7% of Sonic's consolidated pre-owned unit sales last quarter.

But the thing that clearly got investors excited about the company's growth prospects is what CEO David Smith said about EchoPark's long-term potential:

As we expand our footprint into other areas across the country, we believe EchoPark will exceed the overall volumes and profitability of our franchised dealerships.

The company doesn't provide guidance, but analysts currently expect Sonic to report full-year adjusted earnings per share of $2.04, which would mark growth of 15% over 2018. Analysts expect total revenue to be up by 0.70% to reach $10.02 billion.

The stock's forward P/E has increased from less than 8 to 11.25 in the last few months, which constitutes most of the stock's return in the first half of 2019. Investors believe the expansion of EchoPark is what the company needs to sustain growth over the long term. If EchoPark continues to grow its profit contribution, as management expects, there could be further upside to the stock.