So as investors try to decide how best to tap into the credit card and e-commerce transactions market, it's worth a closer look at both of these companies to determine which one seems like the better long-term investment. 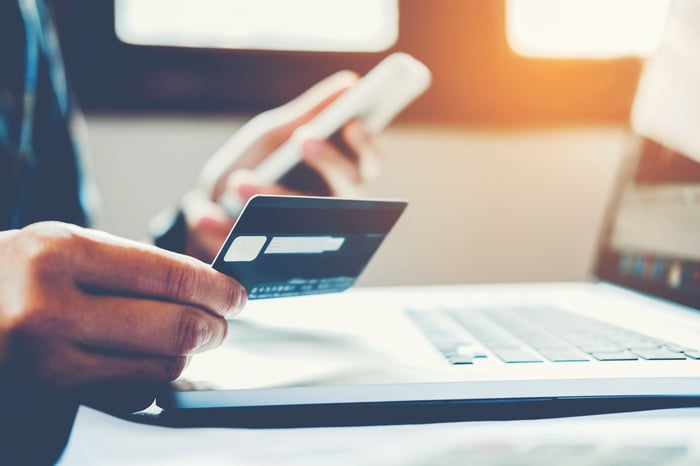 It has been nearly synonymous with online payments for years, but the company is expanding into new markets as well, namely the person-to-person market with its Venmo app.

Venmo allows users to easily exchange money with one another, and PayPal has expanded the app's ability to include making purchases at physical merchant locations as well. At the end of the first quarter, Venmo had 40 million active users and accounted for 23% of PayPal's total payment volume (TPV) in the quarter.

As more consumers use mobile apps to pay for physical goods and exchange money with one another, PayPal is poised to benefit from the expansion of the e-commerce market -- which is poised to become a $24 trillion market by 2025 -- as well as the broader digital payments market, which PayPal's management believes could eventually be worth $100 trillion.

Amex makes the majority of its revenue from transaction fees it charges merchants when consumers use its credit card. In the first quarter of this year, these transactions fees (called discount revenue) were up about 5% year over year.

American Express' overall performance in the quarter was strong as well. Total revenue increased by 7% from the year-ago quarter to about $10.4 billion, and diluted earnings per share (EPS) jumped 8% to $2.01. And there's likely more for investors to look forward to. Management expects sales to increase by about 9% for the full year, and for EPS to be between $7.85 and $8.35.

But aside from its recent performance, investors should look to the company's recent partnerships for a glimpse of how this company will perform in the coming years. Most notably, it was able to renew an important deal with Delta, continuing a co-branded credit card partnership that virtually prints money for American Express.

The credit card represents about 8% of the company's total billings, and the partnership is good through 2030. American Express' CFO Jeffrey Campbell said on the most recent earnings call that the Delta partnership is "one of the fastest growing parts of our business with many years of growth above the company average," and it looks forward to many more years of this strong growth.

This match is a close call considering that both companies are doing a great job of growing their businesses. American Express is building on strong partnerships while continuing to expand its core business. Meanwhile, PayPal is firing on all cylinders, and the company is entering new digital payment markets that are still in their infancy.

But ultimately, I believe PayPal has the most potential to bring gains for its investors. The company has successfully forged partnerships with credit card companies, including American Express. Those partnerships mean that PayPal benefits from digital transactions, no matter which credit card or bank a PayPal user has. Additionally, PayPal is benefiting from the rapid growth of the e-commerce market through its Venmo app. As more consumers look to apps to pay for goods and services, Venmo is poised to become one of the easiest ways to do so.

Both companies could end up being excellent long-term investments, but PayPal's payment platform is bank and credit card company agnostic, meaning it benefits from transactions on its platform and apps no matter which financial institution is involved. American Express can't claim the same benefit, so PayPal gets the win here.