At first glance, recent IPO Cambium Networks (NASDAQ:CMBM) might seem like an exciting, newly public company. After all, it makes point-to-point and point-to-multipoint wireless internet radios, which help bring connectivity to people all over the world where a wired connection isn't available. Wireless mobile data traffic is expected to explode over the next few years. According to Cisco Visual Networking Index: Global Mobile Data Traffic Forecast, mobile data is expected to grow at a compound annual growth rate of 46% between 2017 and 2022, and in 2017, 54% of traffic was offloaded to a wireless broadband network.

That should, in theory, play right into Cambium's wheelhouse. Cambium's roots lie in the old Motorola Solutions wireless business, which was begun in 1999. In 2011, that business was acquired by private equity group Vector Capital, which still owns over a two-thirds stake in Cambium even after the new offering.

Since then, the company has grown revenue steadily -- last year, revenue grew 17% on the back of over 1 million radios shipped. In addition, the company's $242 million in 2018 revenue is only a fraction of its estimated $22 billion in total addressable market.

On Wednesday, June 26, Cambium issued public shares, raising almost $70 million at $12 per share. That was below the initial range the company sought of $13 to $15, and now the stock trades even lower, at roughly $9.50.

So, should investors be eager to grab some seemingly discounted shares, or are they wise to exhibit caution? I think it's the latter -- here's why investors should avoid Cambium's stock right now. 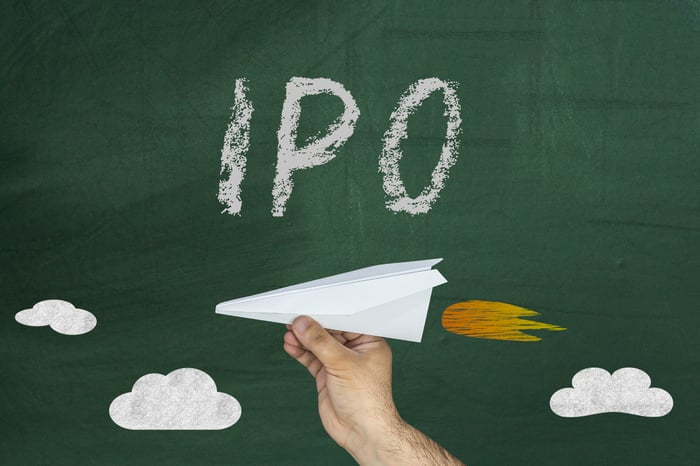 However, annualizing even the current profitable quarter would only take Cambium's net income to $7.2 million. Currently, the stock is priced at a market capitalization of $243 million, or about 33 times that figure.

Cambium ramped up research and development (R&D) and sales and marketing costs last year, even as gross margins fell from 51.1% in 2017 to 47.8% in 2018. Even though last quarter was more profitable, it was because the company eased off R&D growth, as gross margins continued to decline to 46.7%, which the company attributed to "changes in product mix, freight costs, and increases in excess and obsolescence reserves."

Investors never like to hear "excess and obsolescence," which means that the company may have had to write off some inventory, likely of older products.

Another red flag is that the company is using about 40% of the proceeds to pay down its term loan with Silicon Valley Bank, a division of SVB Financial, which totaled $93 million prior to the IPO. In addition, Cambium has $10 million drawn on its revolving credit facility. As of March 31, 2019, Cambium had only $3.8 million in cash and cash equivalents. For a company whose margins are thin, that's a pretty slim cash balance.

In fact, the company has been in violation of its financial covenants a few times over the past year. Cambium actually violated the minimum adjusted quick ratio as recently as May 2019. Cambium also had to get a waiver after violating its fixed charge coverage ratio and its consolidated leverage ratio as of the quarter ended in September 2018.

Though the company has been able to get waivers on its debt covenants from SVB, the dubious balance sheet may shed some light onto why the company chose to sell public shares at this time.

The market size may be overstated

Aside from the low margin and significant debt levels, there are also a few other red flags for investors. First, that $22 billion total addressable market may be overstating things. For instance, that number includes the Ethernet switching market of $12 billion, and Cambium just began selling Ethernet switches as of last year, which contribute a negligible amount to revenues. The $22 billion figure also includes the enterprise WLAN segment of $6.2 billion, another new segment it entered in just 2016, which only accounts for under 10% of Cambium's revenues.

In fact, the company's core point-to-point and point-to-multipoint radio markets combined for just $3.9 billion in 2018, which means the additional $18 billion market opportunity is from brand-new products with which Cambium may or may not find success.

In addition, Cambium isn't exactly free from competition. In fact, it has rather significant competition, especially from Ubiquiti Networks (NYSE:UI) -- which competes against Cambium in both its core wireless radio business and the enterprise WLAN business -- as well as Ruckus Wireless, Aruba Networks (owned by Hewlett Packard Enterprise, and European-based MikroTik.

That tough competition means that if push comes to shove, Ubiquiti has more room to lower prices or invest more to put even more pressure on Cambium if it needs to.

While many recent IPOs may offer the promise of big short-term gains, they also have a fair amount of risk involved. As a low-margin hardware maker with significant competition, Cambium is definitely in the higher-risk category and should be avoided for now.