Please ensure Javascript is enabled for purposes of website accessibility
Log In Help Join The Motley Fool
Free Article Join Over 1 Million Premium Members And Get More In-Depth Stock Guidance and Research
By Nicholas Rossolillo - Jul 9, 2019 at 11:31AM

Shares of this semiconductor firm are cheap, but cheap for a reason.

Woes for Taiwanese chipmaker Himax Technologies (HIMX 1.28%) continue. The stock has recently rallied off of multiyear lows, but is still down over 50% in the last 12 months as of this writing.

The semiconductor industry is notoriously volatile, and the commoditized display-driver technology that Himax specializes in -- the hardware that powers TV, smartphone, and automotive screens -- is especially so. Overall demand for display hardware has remained stubbornly in stagnation for some time, and the company's outlook doesn't leave much in the way of hope.

After a mixed bag of results in 2018 -- revenue grew 6% but earnings per share fell 69% -- Himax disappointed during the first three months of 2019. Revenue was essentially flat year over year, which meant the company remained in the red.

It wasn't all bad. Display drivers for TVs increased 18% from the same period in 2018 as ultra-high-definition TV sales continued to rise. However, those gains were offset by a 6% drop in small-display drivers. Smartphones and tablets -- which used to be Himax's biggest segment -- was the contributor to the decline. Although automotive displays grew, they have been slowing down in recent quarters as well. The once shiny small-display-driver business has lost its luster because consumers are holding onto their old devices for longer, which has resulted in slight declines in device shipments the last couple of years.

The bigger story, though, was the non-display-driver business, to which Himax has been pinning its growth hopes for years. Made up primarily of 3D sensing technology (best known for enabling facial-recognition features), this small segment declined 19% during the first quarter. Management said that it sees a rebound coming during the back half of 2019, but that orders for its chips should be about even with last year. In other words, investors should expect no annualized growth from that particular corner of Himax.

Himax's first-quarter loss followed on the heels of a loss in Q4 of 2018, the first time ever the company has reported back-to-back losses. The outlook is the same for the second quarter of 2019. Revenue is expected to increase slightly sequentially, but profit margins are under pressure due to oversupply for the company's chip specialties. There is limited visibility into when things will turn a corner, and management cited significant headwinds throughout the global economy. The company is trying to keep costs in check, but there seems to be little else that can be done.

Nevertheless, semiconductors are a cyclical affair, and Himax has been in a similar situation in times past. Chip inventory levels will eventually normalize and allow growth to resume, which should lead to a rally for the stock. At least one analyst thinks that will happen sooner than later. 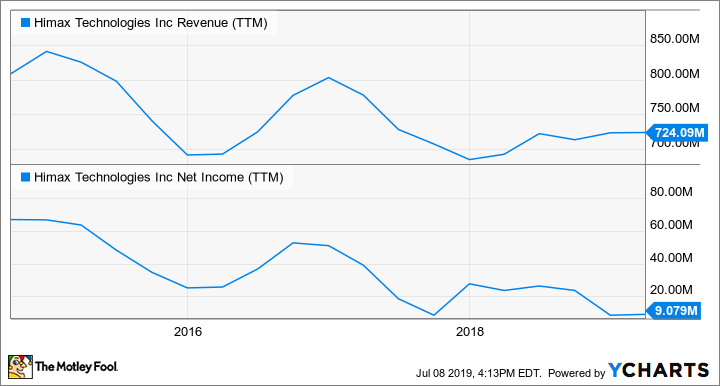 That doesn't mean investors should rush in and buy, though. Profit margins on Himax's products are thin when compared to some of its peers, and the company's bets on next-generation technology have yielded little fruit. The average analyst consensus has Himax's bottom line rebounding in the year ahead, but the forward price-to-earnings ratio currently sits at 37.8 -- not exactly a bargain for what's little more than a cyclical seller of commoditized display hardware.

If Himax can muster a rebound during the second half of 2019, shares are likely to post a rally. However, I wouldn't expect that to be a long-term turnaround, just as it hasn't been in times past. Thus, unless you're looking for a high-risk short-term jump in share price and have the time to keep a close eye on Himax shares, I say: Skip this one.