What do you call Taco Bell without any tacos? Customers may soon have to come up with a new name for their favorite Mexican food eatery as the Yum! Brands (NYSE:YUM) fast food chain confronts a shortage forcing it to limit menu items featuring the flatbread.

The "tortillapocalypse" befell Taco Bell because a supplier ran out of 10-inch tortillas, which are necessary to a broad swath of its menu, everything from burritos and quesadillas to grillers and, yes, tacos. To compensate, the chain is encouraging customers to try its Power Menu Bowl and Cheesy Gordita Crunch instead. 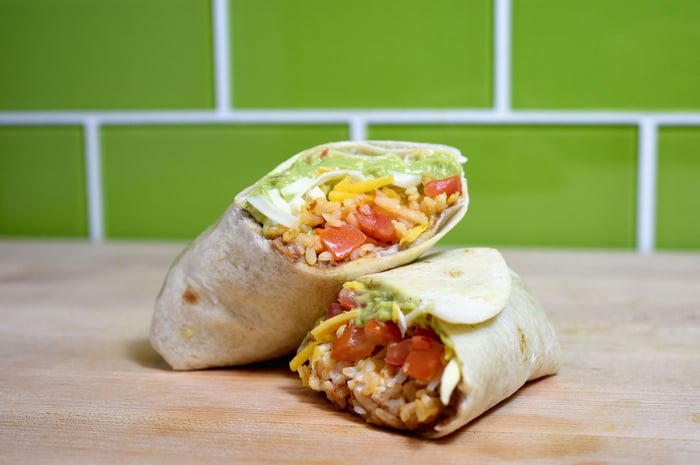 While The Wall Street Journal has likened it to the "burrito coverings" shortage in the movie Idiocracy, this scarcity also brings to mind the "guacapocalypse" that struck Chipotle Mexican Grill (NYSE:CMG) a few years ago when that Mexican food chain mentioned running out of avocados as a potential risk.

While there was never actually an avocado shortage -- though people acted as if there were -- food chains do suffer from ingredient shortages from time to time, and it can disrupt the business.

Yet the difference between those shortages and what Taco Bell is facing is that none of the products were so closely identified with a chain and its menu as tortillas are with Taco Bell. Tortilla-based items comprise about half the menu, and without them Taco Bell could lose substantial business. Even if a guac shortage had actually happened, it wouldn't have had such an effect on Chipotle's business, no matter how much its fans love the condiment.

The seasoning that adds the spice

Regardless of whether this is a temporary supply issue that will be resolved in relatively short order as Taco Bell finds new vendors to buy tortillas from, which the restaurant said it's trying to do, it could result in a hit to Yum! Brands' earnings.

Taco Bell is the straw that stirs the restaurant operator's drink. Although there are three times as many KFC restaurants worldwide as there are Taco Bells, and they generate about two and a half times as many sales, it is Taco Bell that accounts for a third of the company's total operating profit.

Its restaurants are also individually more profitable than KFC and Pizza Hut, generating on average about $1.5 billion in sales annually per store, compared to $1.1 billion and $0.6 billion, respectively.

Not the beginning of the end times

So far neither Taco Bell nor Yum! Brands has indicated how extensive the problem is, though news reports indicate there are currently only pockets of shortages, with restaurants in Alabama, Georgia, New York, and Tennessee reporting they're having to do without.

Yet even if the tortillapocalypse is broader than originally believed and lasts longer than expected, it will likely end up hurting sales for a quarter at most. The Four Horsemen will not be riding in to foretell Taco Bell's doom. Once the supplier issue is resolved, the Mexican food chain will resume its upward sales trajectory.

It will likely spur the chain to diversify its supplier list and maybe even its menu, but what the incident reveals most is just how popular Taco Bell remains with the public and how critical it is to Yum! Brands' financial well-being.