General Motors (NYSE:GM) stock came into June trading at recent lows after President Trump suddenly threatened to impose tariffs on Mexico, a key manufacturing partner for GM and other automakers. Entering the month at a low price following that sell-off and a change in the macroeconomic winds helped push GM stock up 16% last month according to data from S&P Global Market Intelligence.

Though there was little company-specific news out on GM during the month, the stock nonetheless posted robust gains as the news was kind to cyclical stocks like the Chevy maker. 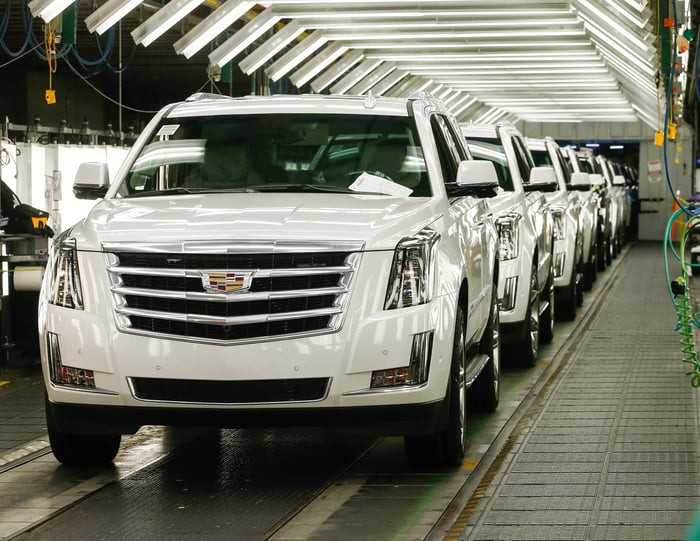 The chart below shows the stock's gains over the course of the month compared with the S&P 500. 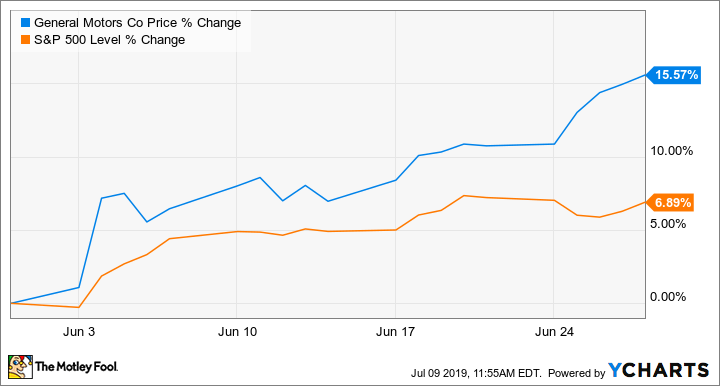 General Motors stock rallied 6% on June 4, its best day of the month. Also on that day, the S&P 500 rose 2% on news that China would favor more negotiations rather than turn up the heat in the trade war. More importantly, Federal Reserve Chairman Jerome Powell said that the central bank would be willing to lower interest rates if the economy began to sputter or if the trade war weighed on growth.

Both items favor GM. The automaker's biggest market is in China, where it sold 3.6 million vehicles last year, so any potential resolution in the U.S.-China trade war is likely to benefit the company. Similarly, lower benchmark interest rates would help lower or keep auto loan rates down, making it easier for Americans to buy new vehicles.

Later that week, GM got another boost as President Trump said he would pull back from tariff threats on Mexico, averting a potential headache for GM.

In the last week of June, GM shares rose again as the company announced $20 million of additional investments in its Arlington, Texas, plant, part of $4.2 billion in investments it's made as it prepares to launch an all-new line of full-size SUVs and pickup trucks. At the end of the week, the stock also rose on hopes for Trump's meeting with Chinese President Xi Jinping at the G20 summit that weekend.

GM stock has slipped modestly thus far in July as the company said that total vehicle sales fell by 1.5% in the second quarter, in line with the broader industry. In China, vehicle sales fell 12.2%,  though there were bright spots including double-digit growth in crossovers and several SUV brands saw sales rise more than 20%.

Looking ahead, investors will get more information when GM reports full second-quarter earnings on Aug. 1, and investors are also hoping for an announcement on the company's promised launch of its Cruise AV ridesharing service in San Francisco this year.