Domino's (NYSE:DPZ) stock has spent most of 2019 trailing the broader market as investors digested mixed results out of the pizza delivery leader. The good news is that the chain's multiyear streak of steady market share gains is intact. However, its growth pace has been slowing for several consecutive quarters, in part due to a questionableexpansion strategy that's putting more delivery locations in direct competition with each other.

On Tuesday, July 16, investors will get a prime opportunity to judge how well the restaurant chain's initiatives are setting the company up for better returns. Let's take a closer look at the key trends to watch in Domino's upcoming fiscal second-quarter report. 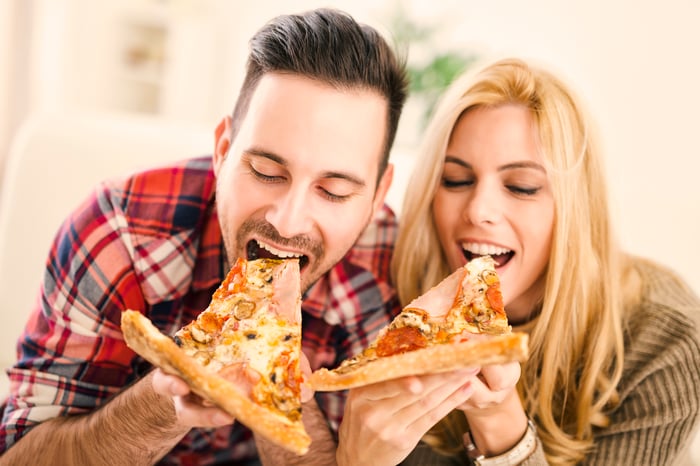 Growth at home and abroad

Yet Domino's has now seen its expansion rate slow in each of the last four quarters, cut in half from the 8% it achieved in early 2018. That disappointing trend puts the focus on this critical growth metric as investors wait for the point at which sales gains stabilize and, ideally, begin accelerating again. Management's long-term goal is for annual growth of between 3% and 6%, and Domino's edged past that target in 2018. This week's report will help show where the growth rate might land in the current fiscal year.

The international story is even more challenging. While Domino's sees its biggest long-term growth opportunity in underpenetrated markets like Brazil and India, the chain has been struggling outside of the U.S. lately. Comps growth fell to 2% in the most recent quarter, and CEO Richard Allison placed the blame on execution issues. "I am not happy with our recent international comp performance," Alison told investors in late April.  We'll find out on Tuesday whether management's latest adjustments helped its franchisees return to a healthier customer traffic pace over the last few months.

Domino's store launch pace was a bright spot in its last quarterly report, with 200 new locations helping push sales higher by 9% after accounting for foreign exchange rate shifts. This figure included 31 launches in the mature U.S. market, which is already home to over 5,900 stores. Domino's is adding restaurants right within the delivery zone of established locations in a strategy that management calls "fortressing." In fact, the 258 stores it added in the U.S. last year constituted its fastest growth pace in decades.

This initiative is hurting comps today as the new stores steal pizza orders from established locations. Yet the approach should be a long-term win because it lowers delivery and carryout wait times while discouraging outside competition from entering the neighborhood.

Look for the management team to discuss how well that process is playing out when they comment on the store growth wins on Tuesday. If, as has been the case over the past few years, franchisees' profitability continues rising, then executives will likely see no reason to slow down the aggressive expansion pace that has roughly tripled restaurant-level annual earnings since the fortressing strategy started back in 2012.