Recent IPO Grocery Outlet (NASDAQ:GO) is a deep discount supermarket, which is typically not the kind of business you find in the same sentence as "growth stock." But this chain believes it can expand from its current base of 325 stores to as many as 4,800, which would definitely put it on an upward trajectory.

Deep discounters Dollar General (NYSE:DG) and Dollar Tree (NASDAQ:DLTR) operate over 15,000 locations, and Walmart operates over 5,000 supermarkets across the U.S., which suggests that Grocery Outlet's long-term goal is reachable. But there are some very big hurdles in its path that should make investors question whether it's sustainable. 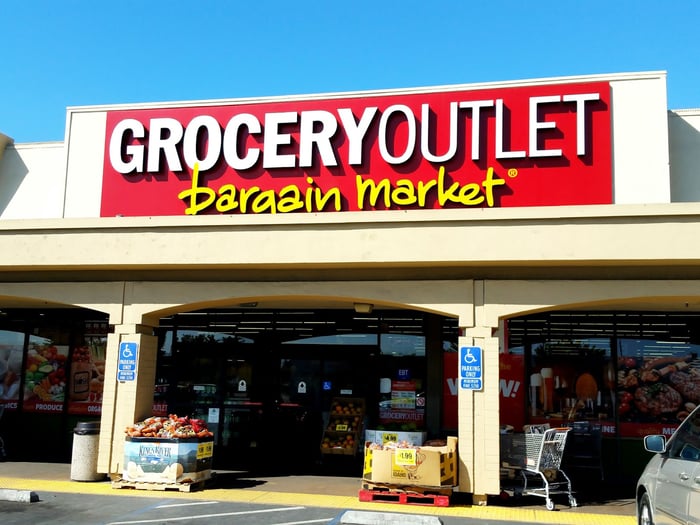 It took Grocery Outlet 15 years to grow to its current size, but it plans to expand the number of stores by 10% annually. It believes it can grow to 400 stores in the six states where it currently operates (all in the West except Pennsylvania), with an additional 1,600 stores in neighboring states. At that rate, it would take Grocery Outlet almost 20 years to hit that goal, while its ultimate goal of 4,800 stores is so far out into the future as to be meaningless.

Supermarkets operate on thin margins, and because the discount grocer has adopted a franchise model, it ends up splitting the profits its stores generate with franchisees, leaving little room for error. While the franchise model means the store operators take on the costs of opening a new store, Grocery Outlet helps them by financing the project, meaning it will incur even more debt than it already shoulders.

The grocer ended 2018 with over $857 million in long-term debt, a sizable amount when you consider it only had $21 million in cash and equivalents. While the proceeds it raised from its IPO were going to be used to pay down some of the debt load, the Grocery Outlet will still be carrying significant obligations.

There's also a question of just how popular its stores will be on a much larger scale. It describes them as "a fun, treasure hunt shopping experience in an easy-to-navigate, small-box format." Prices tend to be 40% to 70% below conventional retailers, which would be an inducement to shop there, but it also has a constantly changing mix of brands as its buyers look for the best deals. CEO Eric Lindberg described Grocery Outlet to TheStreet as "the T.J. Maxx for food."

Having a "treasure hunt" experience works well for dollar stores, but grocers aren't the same thing. And because shoppers can't expect to find the brands they want from day to day, it means it needs to rely solely upon the lure of low prices.

Walmart offers an every-day low price guarantee on name-brand goods that shoppers know will be there each time they go back. Aldi and Lidl have also embarked on major expansion campaigns in the U.S. and provide a shopping experience somewhat similar to Grocery Outlet. They also have much greater financial support from having operated successfully in the U.K. and Europe for years, and they're not splitting profits with anyone.

Perhaps the biggest issue for Grocery Outlet is that it has no e-commerce capabilities and doesn't intend to offer them. In-store purchases may be how most grocery shopping is done today, but online shopping is the hot battleground of the moment, and Grocery Outlet is purposefully allowing itself to be left behind. When it finally does decide to catch up, it will be too far down a hole to be meaningful.

It should be a self-checkout for investors on this one

There is undoubtedly a market for what Grocery Outlet is selling, and because it's in a highly fragmented industry, there is plenty of opportunity to find a niche to exploit. But investors should be wary of getting caught up in the hype of an IPO.

Grocery Outlet faces significant hurdles in trying to achieve goals that seem too lofty, and it has hamstrung itself by refusing to offer online sales. This supermarket stock got off to a fast start, but it's in the express lane to nowhere.