Investors better hope it's not.

Original programming isn't cheap, which has some experts believing the unthinkable might happen: Netflix (NFLX 4.15%) may soon start broadcasting commercials. Although the streaming video giant spends billions of dollars each year to acquire rights to new, original content, offsetting those costs by running advertising would be devastating to its bottom line, more so than if it stayed ad-free.

There are arguments to be made for abandoning commercial-free streaming. Netflix is engaged in a protracted battle for eyeballs with Amazon.com's Prime service and Disney (DIS 1.64%), which has both the Hulu channel and its new Disney+ service launching later this year. So Netflix will need to spend up for quality content, which could hurt its balance sheet without an offsetting revenue stream. 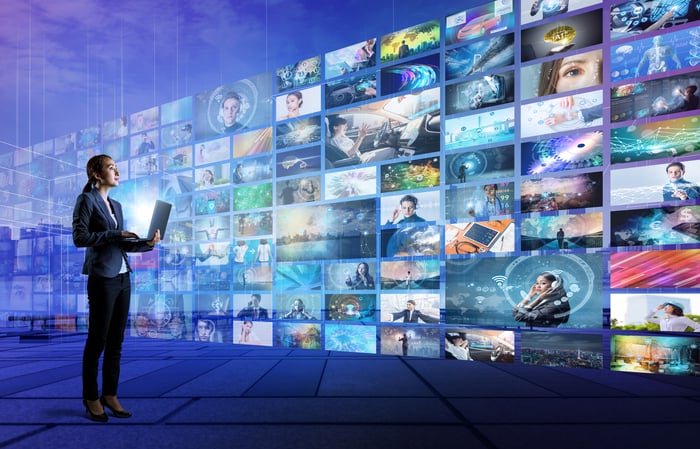 Moreover, it may lose a lot more programming in the coming months as more providers launch their own streaming services. It lost Marvel content when Disney decided to create its own channel, and it's possible AT&T, Comcast, and others will choose to keep their own content libraries in-house when they launch their own services.

It is one of the reasons Netflix went on a spending spree to acquire content, and though there have been some Oscar-worthy shows in the mix, a lot of it is more pedestrian and without discernible critical appeal. There's also a lot more foreign language programming on Netflix, and while that casts its net a little wider for an audience, it also means subscribers who don't speak those languages and don't want to read subtitles are going to consider a lot of the catalog as unwatchable.

Introducing advertising on top of that, or charging subscribers a premium if they want to remain ad-free, will only cause further drop-off

The high cost of keeping up

Netflix is in a bind. Long-term debt has ballooned to over $10 billion as of the end of the first quarter. As recently as three years ago, there was just $3.3 billion in debt. But it almost doubled in 2017, and Netflix just announced it wants to take on an additional $2 billion in debt by selling senior unsecured notes for general corporate purposes, which it says include -- among other expenses -- content acquisition and production and development.

Streaming-content obligations, or the amount Netflix is estimated to owe for programming, rose $1 billion in the first quarter to $18.9 billion. While that's down slightly from the fourth quarter, it is still in addition to its long-term debt load.

Nor is it going to get any better. One Nomura analyst estimates Netflix could pull in $1 billion in revenue if it started running ads. A number of industry executives agree that Netflix either needs to start showing ads on its service or it will have to dramatically raise prices, perhaps even doubling current subscription rates.

Others, though, think Netflix is smarter than that and understands that if it does start running ads, it debases the customer experience it has spent years building up. Netflix itself has been fairly adamant it won't go that route, which is a good thing because an already slowing subscriber growth chart could turn into a deluge of defections.

A mass exodus would ensue

Data from Hub Entertainment Research suggests Netflix would lose nearly a quarter of its subscribers, or some 14 million of its 60 million paid U.S. subscribers, if the streaming service tried to foist advertising on them. The only way they'd stay is if Netflix lowered the cost of a subscription, and it would have to be a pretty substantial discount.

Netflix can't afford to alienate its customers when there will soon be many more choices available to them. Surveys show consumers tend to subscribe to only two or three channels at most, and Netflix needs to be one of them. Showing commercials before, during, or after its programming won't endear the streaming service to its subscribers and increases the likelihood they will hit "unsubscribe."