Please ensure Javascript is enabled for purposes of website accessibility
Free Article Join Over 1 Million Premium Members And Get More In-Depth Stock Guidance and Research
By Rick Munarriz - Jul 10, 2019 at 9:15AM

The social discovery platform operator has its finger on the pulse of what lifestyle consumers and marketers crave. Stock gains should follow.

One of the most anticipated IPOs of 2019 has had a pretty ho-hum beginning. Pinterest ( PINS 0.78% ) is up by a little more than 40% since going public less than three months ago, with a more modest gain of 13% since its first public trade. Pinterest is a winner by most measuring sticks, but it hasn't lit up the market enough to join the conversation as one of this year's hottest debutantes.

Pinterest is a household name, something that applies to just a handful of this year's rookie class of investments. The visual search engine is a hotbed for a sought-after demographics slice of moms (Pinterest may reach 43% of U.S. internet users but closer to 80% of the online moms) who earn and spend more than the country average. The social discover site and app appeal to advertisers, but investors got cold feet after taking in Pinterest's first quarterly report as a public company in mid-May. Although the stock has all of the makings of being a monster stock, let's go over its first few months of trading before assessing how it's likely to fare in the second half of 2019. 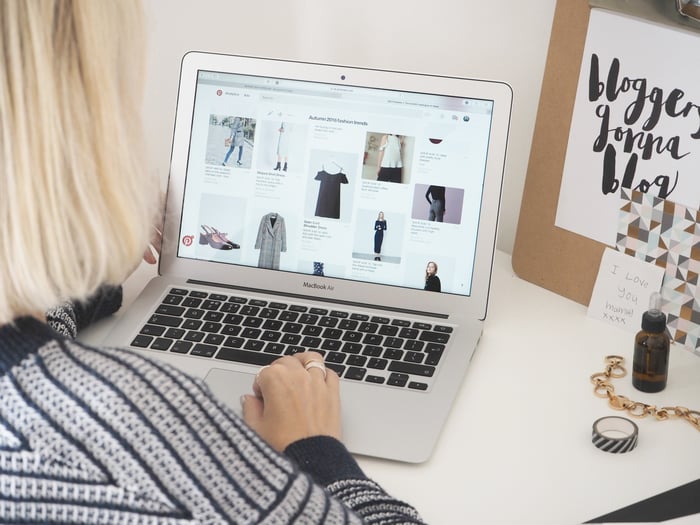 Pinterest hit the market at $19 in mid-April, but it never swapped hands in the teens. The shares traded as low as $23.05 on its first day of trading, peaking at $35.29 less than two weeks later. Those two April extremes continue to be the all-time low and high for Pinterest. The stock's been trading in an unusually tight price range since its first-quarter performance disappointed investors two months ago, and eventually it's going to break one way or the other.

There weren't a lot of surprises in Pinterest's first financial report as a public company, largely because its prospectus -- rolling out a couple of weeks after the end of the March quarter -- provided a lot of color of how the first three months of 2019 played out. Revenue soaring 54% and monthly active users rising 22% to 291 million were already old news by the time the actual earnings release hit the market. The stock took a hit because of a larger-than-expected loss and weak guidance, two things that were never addressed in the April offering prospectus.

Pinterest's outlook calls for 40% and 43% in revenue growth for all of 2019, a marked slowdown from the 60% top-line jump it posted last year. It's still not a surprise when a fast-growing company is easing off the accelerator on the top line. Pinterest will crack $1 billion in revenue this year, and companies of that size growing revenue north of 40% are rare and welcome.

As long as the platform's popularity keeps growing, it's hard to bet against Pinterest. Its emphasis on potent lifestyle core verticals of food, home, beauty, and fashion make it a no-brainer to monetize through ads as well as e-commerce opportunities. When it does break out of its recently tight trading range, it should be to the upside. Pinterest is a buy.