In case you hadn't noticed, 2019 is turning out to be a year of denim revival -- at least on Wall Street. When it spun off from VF Corp. (NYSE:VFC) on May 23, Kontoor Brands (NYSE:KTB) joined Levi's as the second jeans-focused company to go public this year.

VF Corp. effected the Kontoor split to allow its faster-growing brands, including Vans, The North Face, and Timberland, to operate separately from the mature jeans business, thus making their growth potential more visible to investors.

In return, Kontoor gets its own resources and a management team dedicated solely to improving jeans revenue. The company, which owns the popular Lee and Wrangler jeans brands, can now embark on a multiyear plan to improve margins and gradually juice global sales growth.

The value proposition, and risks of investing

Kontoor's cachet rests in a promise of stable total annual shareholder returns in the range of 8% to 10%. The company intends to achieve this by delivering 1% to 2% top-line growth, 2% to 3% operating margin expansion, and an ample dividend yield of 5%. This framework leaves room in the budget for share repurchases, an expansion of the company's price-to-earnings ratio, and strategic acquisitions, so conceivably, Kontoor could exceed that annual return target.

As a standalone entity, Kontoor will generate $300 million a year in  operating cash flows on $2.7 billion in sales, and it expects to net roughly $390 million in adjusted EBITDA. Management has also highlighted the potential to cut $50 million in annual costs. 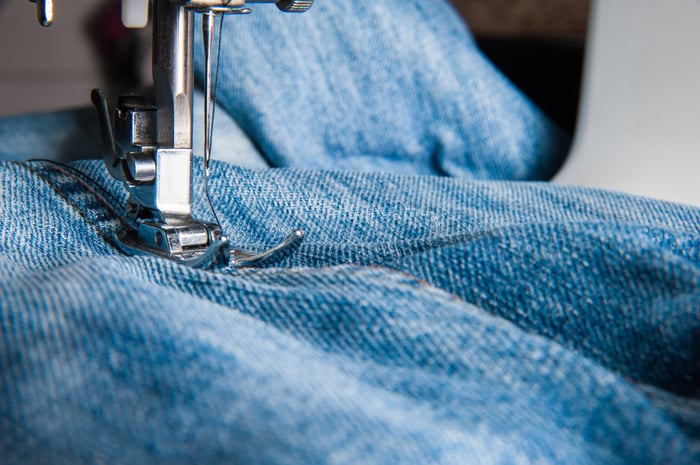 Opportunities for Kontoor to increase its market share abound. In the company's pre-IPO investor presentation, management observed that the jeans industry is a $100 billion market with a historical compounded annual growth rate (CAGR) of 4%, and a projected 5% CAGR over the next few years. Kontoor currently holds a 3% share of the global market, and has achieved status as the No. 1 U.S. men's jean company by revenue, and the No. 2 U.S. jeans company (after Levi's).

As only 27% of its sales are generated outside the U.S., Kontoor has ambitions to widen its international footprint. For example, Lee is the best-selling jeans brand in China, but Wrangler hasn't previously been offered there. Introducing the brand to China wasn't a priority for VF Corp. -- but it is for Kontoor, which plans to launch the Wrangler label there in January.

What are some of the risks of investing in Kontoor? The company released its first 10-Q quarterly results on June 20, for the period that ended March 30. The report revealed lower net income as expected, due to restructuring and spinoff costs.

But Kontoor's top line also decreased by 3%. While this decline was wholly attributable to unfavorable foreign currency shifts, Kontoor's pre-split presentation materials presented the annual top-line growth goal of 1% of 2% annually as net of foreign currency effects. Of course, that was only a single quarter, and management will likely provide full-year guidance when the company releases its results for the quarter that ended June 30.

Investors should be aware of one additional mild risk. Kontoor added $1 billion in new debt to its books in May, an event that was planned as part of the VF Corp. separation. This borrowing financed a payment of $1 billion to VF-related parties pursuant to the transaction. Kontoor previously held no long-term debt on its balance sheet. The new leverage pushes the organization's debt-to-EBITDA ratio to 2.5 times -- a moderate burden that investors need not worry about unless additional borrowing is undertaken.

When Kontoor presented its pre-IPO plan to investors, it outlined a dividend policy which envisioned quarterly payments of $0.56 per share. This was consistent with the company's total shareholder return equation, which was based on a 5% dividend yield. The $2.24 in annual payments made sense given that the expected value of Kontoor shares post-spin-off was in the neighborhood of $40, theoretically producing a yield of between 5% and 6%.

However, since the company began trading on the New York Stock Exchange on May 23, shares have lost as much as one-third of their value; they are now down roughly 20% from the spin-off date pricing, trading in the neighborhood of $32 as of this writing.

When Kontoor released its 10-Q report on June 20, management reaffirmed its intention to make quarterly dividend payments of $0.56. At its current trading price, shares now yield approximately 7%. In other words, investors can receive a discount on the anticipated yield structure, and enjoy an extra two percentage points of dividend yield with no fundamental change in operations to worry about.

This is an opportunity for conservative, income-oriented investors, as Kontoor's jeans business, while not a torridly expanding revenue stream, is quite stable and dependable. Earnings may reflect further restructuring and separation costs next quarter, but investors should at least have more clarity about the company's outlook after the next report. Trading at 9 times forward earnings, Kontoor shares already seem undervalued, especially given their handsome payout.