Shares of Chinese discount apparel e-tailer Vipshop (NYSE:VIPS) blasted 58.1% higher in the first half of 2019, according to S&P Global Market Intelligence, as the value of Chinese stocks dramatically recovered from the large sell-off in the fourth quarter of 2018. Vipshop also delivered better-than-expected Q1 2019 earnings results when it reported in May, with increasing profitability on the back of more spending discipline.

Though many had feared the worst regarding China's slowing economy, first quarter economic results came in better-than-feared. The Chinese government supported economic growth with new stimulus measures, as negotiators continued to wrestle with the U.S. over trade practices and tariffs. 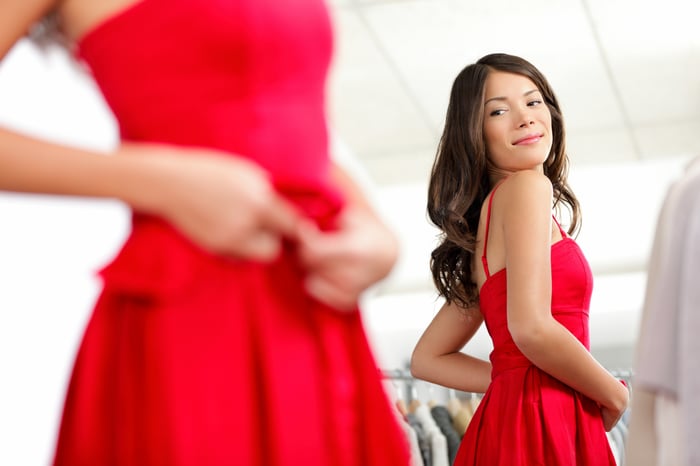 For the first quarter, Vipshop grew revenue 7.3%, better than its initial guidance of 0%-5%. In addition, the company moved gross merchandise volume at an even higher 11% clip, and the number of active customers grew at an even higher 14%.

Non-GAAP net income increased 12.2%, as the company was able to increase its gross margin from 20.2% to 20.4%, while also keeping a lid on operating expenses by outsourcing some fulfillment operations to third parties.

Vipshop is also reaping the rewards of its strategic partnership with JD.com (NASDAQ:JD) and WeChat parent Tencent Holdings (OTC:TCEHY), which collectively invested $863 million in Vipshop in December 2017, for a combined 12.5% stake. Management pointed to on-boarding high-quality customers from JD's WeChat mini program.

The company is also executing better on its core discount apparel business, with CEO Eric Ya Shen saying:

[L]ast year, we started to focus or refocus onto the discount segment which is what we began our business with and within that segment, our focus is on the apparel category, which has traditionally been our strongest category and the core reason of why customers come to us. The most important thing is we're beginning to be more selective in terms of the product assortment on our platform and really focusing on the good merchandising.

Though Vipshop has surged this year, its $7.88 stock price is still far below the all-time high of more than $29 set in 2015. In addition, the company trades at a very low 9.5 forward P/E ratio based on next year's earnings. As such, value investors may wish to take a look at the company, as long as management keeps revenue and margin going in the right direction in China's competitive retail sector.