Shares of the home goods retailer hit another low after another weak earnings report.

Shares of Bed Bath & Beyond ( BBBY -1.60% ) were taking a dive today after the home goods retailer turned in another ugly quarterly earnings report, including a steep drop in comparable sales and a $401 million goodwill impairment charge, following a similar write-off in the quarter ended in April. The results signaled that the flailing retailer is still in desperate need of a turnaround strategy. 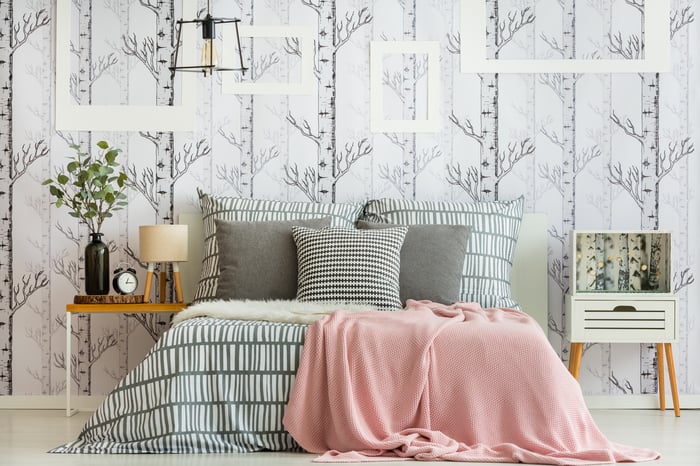 Comparable sales fell 6.6% in the first quarter, and overall revenue declined by the same amount to $2.57 billion, just shy of estimates at $2.58 billion.

Gross margin slipped from 35% to 34.5%, a sign that the business's core profitability continues to compress. Selling, general, and administrative costs actually rose in the quarter, in spite of declining revenue, though part of that increase was due to severance costs.

Adjusting for $448 million in goodwill and asset impairments, severance, and shareholder activity costs, the company reported a non-GAAP per-share profit of $0.12, down from $0.38 a year ago. That result still beat estimates at $0.08.

Interim CEO Mary Winston, who replaced Steven Temares in May in response to demands from activist investors, acknowledged the challenges ahead, saying, "We recognize that there needs to be a fundamental change in our approach to executing the Company's business transformation." She outlined four priorities for the company, including stabilizing and driving top-line growth, resetting the cost structure, reviewing the asset base including its ownership of chains like World Market and Buy Buy Baby, and refining the organizational structure.

The retailer also lowered its outlook for the year, saying it expected results to come in at the low end of its previously stated range of $11.4 billion to $11.7 billion and adjusted earnings per share of $2.11 to $2.20.

Shares of the retailer hit a 20-year low on the news. By conventional definitions, the stock looks cheap at a P/E of about 5 based on this year's expected earnings. But it's hard to understate the work the company has to do to turn around the business, as its cavernous stores are ill suited to the e-commerce era and it's trained its customers not to purchase without coupons. The 6.6% drop in comparable sales speaks for itself.