One of this year's most surprising winners has been General Mills (NYSE:GIS). The packaged-food company, best known for its line of cereals including Cheerios, has struggled over the past few years as consumers have shifted away from packaged foods in favor of smaller, newer brands, and organic and natural foods.

However, the stock has staged a comeback in 2019 as it rode the market recovery in the beginning of the year and posted strong third-quarter results in March. Though the stock has traded relatively flat since then, it's nonetheless racked up a 38% gain as of July 11, according to S&P Global Market Intelligence.

The chart below shows the stock's gains so far this year. 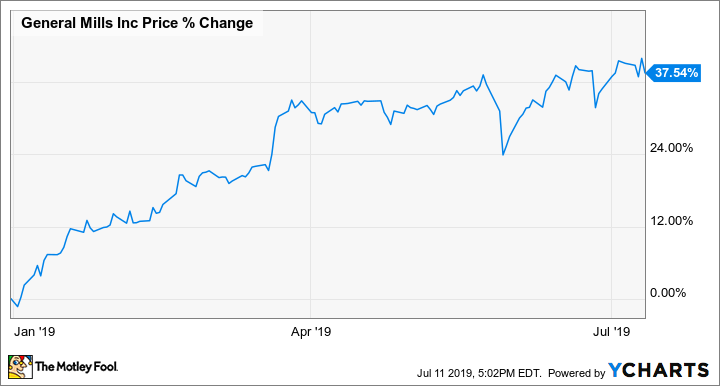 General Mills started the year on an upswing, tracking with the broader market recovery after a sharp sell-off last December. In February, the stock got a boost as it reaffirmed its guidance for fiscal 2019, which ended on May 26, at the CAGNY Conference. Guidance called for organic sales growth -- which excludes the impact of divestitures and acquisitions -- of flat to 1%, or 9%-10% growth when including the Blue Buffalo acquisition and an increase in constant-currency adjusted operating profit of 6%-9%. The company also said adjusted earnings per share would be flat to down 3%.

Jonathan Nudi, the company's President of North American Retail, also said the company had seen "clear improvements" in the U.S. business over the last two years, which was encouraging news to investors.

The Yoplait parent followed that up with a solid third-quarter earnings report on March 20, pushing the stock up 10% over a one-week span. Organic sales rose 1%, while overall net sales were up 8%, to $4.2 billion, and adjusted operating profit surged 25%. Adjusted earnings per share also rose 6%, to $0.83, easily beating estimates at $0.69, and the company lifted its adjusted earnings-per-share guidance to growth of 0 to 1%.

A couple of months later, shares took a dive when Goldman Sachs downgraded the stock to a sell. Analyst Jason English said he expects performance to slow down as the company laps the benefit of the Blue Buffalo acquisition and has already made efforts to improve its core business. The stock fell 5.6% on May 29 on that news.

After recovering those losses, the stock slipped again after it reported fourth-quarter earnings, as organic sales declined 1%, even as adjusted earnings per share rose 6%, to $0.83, beating estimates of $0.77.

Though the company appears to be having success with the Blue Buffalo acquisition, this is a slow-growth company. While the cereal maker offers reliable income, the stock may have run out of steam from the rally earlier this year as it's arguably pricey at a price-to-earnings ratio of 16.6.