Brick-and-mortar retailers need to find ways to entice customers to leave their homes and come to a store. That's not easy given the simplicity of digital shopping, and it's pushed retailers to try new things.

Macy's (NYSE:M) has been trying to get customers into its stores with its STORY concept. These are boutique stores-within-a-store with revolving merchandise that changes every four to eight weeks. In theory, these boutiques -- which are currently in 30 Macy's stores -- should bring in customers who are curious about what their ever-changing selection might contain.

Now, Macy's has expanded the STORY concept with an interesting retail partnership. It's going to be working with Dick's Sporting Goods (NYSE:DKS) to offer Outdoor STORY, which a Macy's press release described as "an outdoor-inspired playground that places an editorial focus on entertaining, bringing the outside indoors, as well as recreational activities." 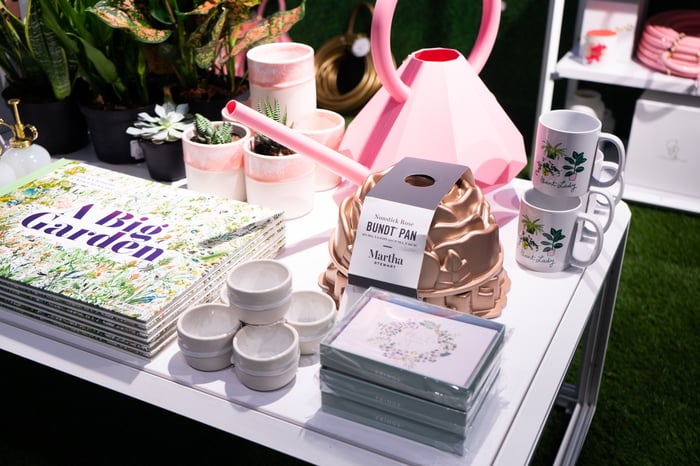 While department stores have partnered with smaller retailers, it's rare (maybe unprecedented) for two retailers of this scope to team up. It makes sense, however, if you assume that the two chains largely have different customer bases.

The Outdoor STORY locations will feature a number of brands, but the Dick's merchandise will be from the chain's private labels. These are products that consumers are not likely to have seen if they have not visited one of the chain's stores.

This partnership brings a new category to Macy's and expands the exposure and reach of Dick's private labels. Using company-owned brands has been a success for Target, helping it differentiate itself from Amazon.com and thus giving consumers a reason to visit its stores. The Dick's/Macy's partnership could give added shine to the sporting goods store's private labels while also driving traffic to both retailers.

Outdoor STORY will also feature classes and gardening products from Scotts Miracle-Gro (NYSE:SMG). Rachel Shechtman is Macy's brand experience officer and the founder of Story, a retail concept store that Macy's acquired in 2018 and that forms the basis for this new partnership idea. She said she believes that this partnership will help both companies.

In the press release, Shechtman said: "I think people may be surprised and intrigued by our partnerships, and that is exactly what we wanted. We want to show both consumers, as well as businesses, that collaboration is the new competition; bringing together brands as storytellers to add authority and authenticity to a subject matter, like we are doing with Dick's and Miracle-Gro, benefits both the customer and the business."

This partnership, like the rest of STORY, remains an experiment. It's hard to see how adding a small store-within-a-store selling outdoor goods for a couple of months (the project runs through September) will produce meaningful foot traffic.

What this test might do is identify products that Dick's offers through its private labels that Macy's might add to its merchandise selection. That could be valuable for both brands because Macy's needs merchandise that consumers can't buy elsewhere, and Dick's Sporting Goods needs greater exposure for its company-owned labels.

This partnership is a toe in the water, but it's a smart step for both brands that could lead to much more. Macy's certainly does not have all the answers, but it does seem to be asking the right questions. That's a very important step in figuring out what will work and whether it is possible to stay relevant as a brick-and-mortar chain.