Shares of Arco Platform (NASDAQ:ARCE) gained 97.9% across the first six months of 2019, according to data from S&P Global Market Intelligence. After falling roughly 6% across 2018, the Brazilian education-services stock has rallied this year thanks in part to strong earnings results and momentum for the broader market. 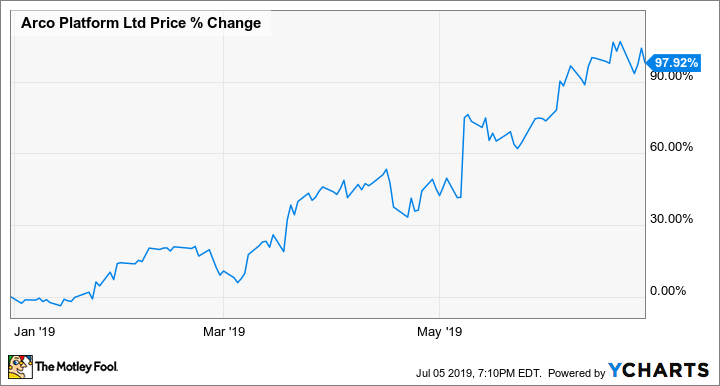 Arco stock gained ground early in the year as the market recovered from steep sell-offs at the end of 2018 and then got a big pricing boost in March due to fourth-quarter earnings results that saw adjusted net income triple compared to the prior-year period and arrived with encouraging guidance. The stock continued to trend higher and then saw more pronounced pricing gains in May due to news of an acquisition and a solid first-quarter earnings report.

Arco Platform published a press release on May 7 detailing its plans to acquire Sistema Positivo de Ensino in an all-cash deal for 1.65 billion Brazilian reals, with half of the payment made at the time of closing and the other half spread out across a five-year period starting in 2021. Based on current exchange rates, the acquisition price amounts to roughly $440 million -- or roughly 20% of Arco Platform's current market cap.

Arco Platform then published first-quarter results on May 21, with sales coming in ahead of the company's expectations at R$117.1 million and adjusted net income coming in at R$40.8 million. The company also reaffirmed its full-year bookings target.

The company is guiding for bookings of R$440.9 million in 2019, up 37% compared to 2018's academic calendar bookings. Brazil's economy has struggled in recent years, and after emerging from recession with 1.1% growth in 2017 and once again posting 1.1% growth in 2018, the country recently cut its growth forecast for this year from growth of 1.6% to 0.8%. The weakening projection is unlikely to affect Arco Platform's performance this year, as the company typically has all of its bookings done based on the academic calendar.

Why Arco Platform Stock Gained 97.9% in the First Half of 2019 @themotleyfool #stocks $ARCE Next Article
Current