Which of these big tech stocks is the better investment for the long term?

The leading big technology companies seem to be steadily taking over the world, so it makes good sense for investors to want some exposure to this very broad space. It can be challenging, however, to decide which stock or stocks to invest in.

Our quest here is to explore which of two of the "big tech" stocks -- e-commerce and cloud-computing giant Amazon.com (AMZN 0.19%) or social-media behemoth Facebook (FB -0.49%) -- currently looks like the better long-term investment. 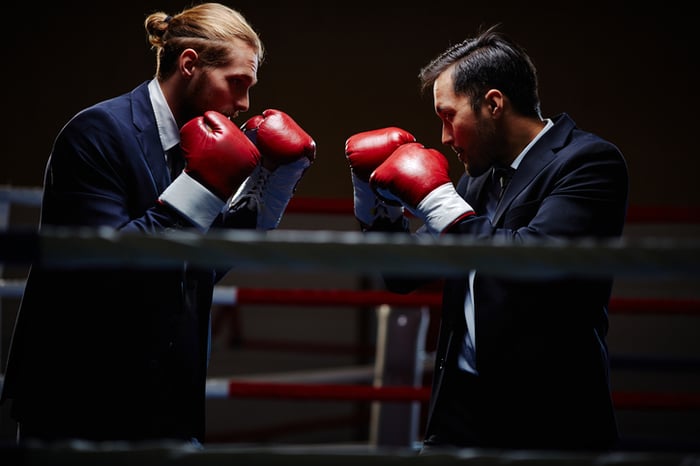 To set the stage, the following chart shows how the two stocks have performed over the last five years. Amazon is the clear winner, outperforming Facebook by more than 2-to-1, though both stocks have crushed the broader market's return over this period. Shares of the two tech titans were performing fairly similarly until early 2018 when there was a big divergence, which we'll get to in the "management" section.

Neither of these companies needs much of an introduction. Amazon is the global leader in the e-commerce market and is also the dominant player in the cloud-computing service space. Moreover, it has its tentacles in many other markets, as listed in the following chart.

Facebook is the 800-pound gorilla in the social-media realm. Along with its flagship social-media site, it also owns Instagram and messaging apps WhatsApp and Messenger. The company generates nearly all of its revenue from advertising.

So far, things are looking good for Amazon in our face-off, but let's move on...

Both companies are led by their respective founders -- Jeff Bezos at Amazon and Mark Zuckerberg at Facebook. This is generally a plus, as research has shown that founder-led companies tend to outperform in the stock market over the long term.

By nearly all accounts, Bezos has run his company, which he founded in 1994, expertly over the long haul. The same cannot be said of Zuckerberg, who began Facebook in his Harvard dorm room in 2004. His leadership deficits, along with those of his top management team, came into full view in early 2018, when the Cambridge Analytica data scandal exploded in the news. This fiasco involved the unauthorized sharing of personal Facebook data of about 50 million people, and its exposure had shares of the social-media juggernaut declining for quite some time.

Both stocks appear to have plenty of room to run, despite the companies' mammoth sizes. Either one should make a good core stock holding for some time.

That said, I'd give Amazon the edge for two main reasons: Bezos has proved to be the better leader, and Amazon has more avenues for growth, in my opinion. Facebook's business is amazingly profitable and probably will be around for a long time, but it's also more subject to changing consumer tastes -- and probably also to government regulation -- than is Amazon's.