If you have a Visa (NYSE:V) debit or credit card, your transactions are made on the world's largest payment network. A payment network acts as the technological backbone between you (the consumer) and a merchant's bank. Visa's VisaNet platform authorizes, clears and settles transactions between you and that merchant's bank -- as well as between businesses, across borders, and now, using a variety of forms of payment.

Visa has the world's biggest share of card payments outside of China. In its past fiscal year, Visa processed over $11.2 trillion in total transactions, roughly double the amount of second-place Mastercard (NYSE:MA).

Visa is in a great position, with a leading infrastructure platform that's almost sure to grow, as the world turns more and more to card and electronic payments and away from cash and checks. You may think you're already off of cash, but over $17 trillion in global payments are still conducted via cash or check.

Visa is aiming to get that business, along with even more transactions in the P2P (person-to-person) and B2B (business-to-business) spaces, in the years ahead. Here are some of the newer initiatives at Visa, all of which should make up larger portions of its business five years out. 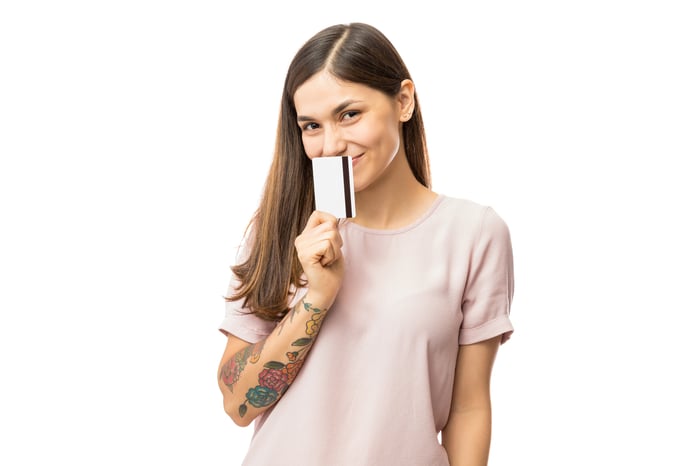 Visa is growing with the times. Image source: Getty Images.

One of Visa's more exciting new products is Visa Direct, which does what its name implies: It facilitates direct payment from a consumer to a financial institution, or vice versa, using Visa's leading payment network. Basically, Visa has expanded its processing capabilities to direct P2P payments, B2B payments, and even disbursements to workers. In last year's annual report, as an example, CEO Alfred Kelly described ride-hailing drivers being able to get paid daily. Visa Direct can often take as little as 30 minutes to process; older and slower ACH (automated clearing house) or check-based systems can take several business days.

Visa Direct has actually been around for 10 years, but its speed and capabilities are just starting to catch on in the U.S. and other developed markets. The company believes the opportunity is huge, at roughly $10 trillion in the U.S. alone -- $1 trillion for P2P, and another $9 trillion for business disbursements. Management also believes the cross-border payments market available for Visa Direct is $6 trillion to $7 trillion.

Thus, the service could expand Visa's markets into many more types of transactions, although good old-fashioned credit and debit cards will continue to take share from cash as well.

One of the new direct payment offerings Visa just unveiled is B2B Connect, its cross-border B2B supplier payments network; it's based upon distributed ledger technology, better known as blockchain.

Though Visa is often pigeonholed as an "old" payments network, the company has fully embraced new technologies and forms of payment, including blockchain and even cryptocurrencies. Last quarter, Visa signed up Coinbase, one of the major brokerages for buying, selling, and holding Bitcoin (BTC-USD) and other cryptocurrencies. The new deal will allow a Visa cardholder to pay for goods and services from a Coinbase account using cryptocurrency, with a Visa credential linked to that account. More recently, Visa announced a partnership with the Libra Association, a governing body overseeing the new Libra digital currency proposed by Facebook (NASDAQ:FB).

Though some may think of new payment technologies as a threat to Visa, the company is determined to partner with every form of payment out there, and open its world-class networks to those flows. In recent years, Visa has transformed its VisaNet networks to become more open-source, and has opened up its leading capabilities to third-party developers via APIs (application programming interfaces), making it simple for companies all over the world to link up with VisaNet.

Ease of use is helping Visa to expand more overseas, especially in Europe and India. Visa made a big move in acquiring Visa Europe back in 2016 for $23.4 billion, and just announced last quarter it had completed the full integration.

Though Visa has been in Europe for some time, its European business is still concentrated in the U.K. and Ireland. On the last conference call with analysts, management said: "[T]here were 12 other markets in Europe with over $200 billion in consumption expenditures. Of these markets, we are well positioned in some and have plenty of room to grow in others."

Management has also pointed to the long-term growth potential of India, where Visa grew its market share in 2018 to over 4.5 million acceptance points. New tech advancements such as card-linked tokens, in which a customer receives a one-time digital code instead of having to enter sensitive card information, are helping to boost security and authorization rates in these emerging markets.

Visa has a tremendous economic moat in its world-class payments network, and all of these new technological products and geographic expansion plans are really just ways to drive more and more traffic onto VisaNet. Last quarter, Visa grew payments volume and revenue 8%, operating income 9%, and net income an even higher 14%, thanks to the operating leverage generated on a relatively fixed network backbone.

Five years from now, Visa's consumer- and business-facing products might be faster, more digital, and more diverse. But the end goal will be the same: to drive traffic to VisaNet.