The stock market didn't go much of anywhere on Monday, as investors seemed comfortable waiting for the beginning of earnings season later this week. Indexes have reached new highs recently, but many analysts expect earnings growth to be relatively weak this quarter, and it's unclear whether shares prices can continue to climb given that level of uncertainty. Yet even with that lackluster backdrop, some stocks did manage to post substantial gains. Crocs (NASDAQ:CROX), Golden Star Resources (NYSEMKT:GSS), and AVROBIO (NASDAQ:AVRO) were among the top performers. Here's why they did so well.

Crocs gets a vote of confidence

Shares of Crocs jumped 7% after the footwear maker got positive comments from a prominent analyst firm. Piper Jaffray upgraded Crocs stock from neutral to overweight and increased its price target from $22 to $27 per share. As apparel and footwear retailers get ready for the key back-to-school season, Piper believes that Crocs is doing better than many of its peers in the industry, and smart management of inventory has also put the shoemaker in a strong position. Although many have noted that tariffs could hurt the company, the analyst believes those concerns are overrated. Even after a monumentally good 2018, it seems there's room for more upside for Crocs. 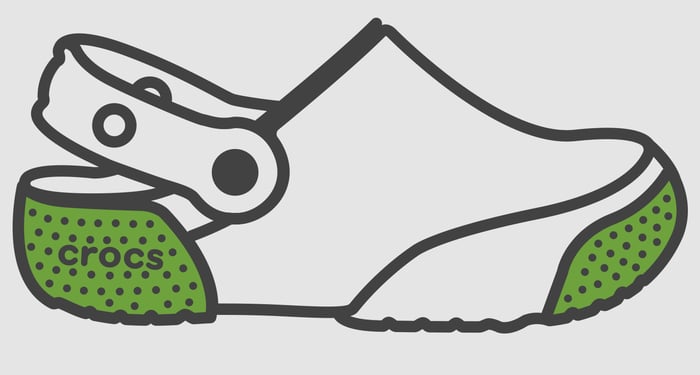 Golden Star Resources saw its stock climb 13% following the latest announcement concerning its operations. The mining company said that it's found what it called "significant gold mineralization" at its Wassa underground gold mine in Ghana, with a long list of drill sites showing varying levels of potential gold deposits. In light of the results, Golden Star expects to cut back on drilling in favor of concentrating its efforts on updating models in an effort to focus on the most promising areas. Results at another mine, the Farmer Brown site, were also encouraging, and investors hope that good operational performance along with rising gold prices so far in 2019 could help Golden Star thrive.

Finally, shares of AVROBIO soared 15%. The gene therapy company released some data from two clinical trials of its AVR-RD-01 investigational gene therapy for patients with Fabry disease, and the early results showed substantial reductions in Gb3 inclusions as shown through kidney biopsy results. Reductions in plasma lyso-Gb3 levels were also encouraging, and the treatment left kidney and cardiac functions stable. CEO Geoff MacKay was happy with the trial data, and he believes that there are a lot of potential applications for AVR-RD-01 beyond Fabry disease -- while hoping that investigations into those other diseases could lead to equally strong results for AVROBIO's treatments.