After going public last month, popular enterprise messaging and collaboration platform Slack (NYSE:WORK) is seeing its coverage heat up, with three analysts initiating yesterday with buy ratings. An additional four analysts have kicked off coverage of Slack this morning, and this round of ratings is not as bullish as Monday's. In fact, three of the analysts have assigned neutral (or equivalent) ratings, recommending that investors stay on the sidelines.

Here's what Wall Street has to say about Slack today. 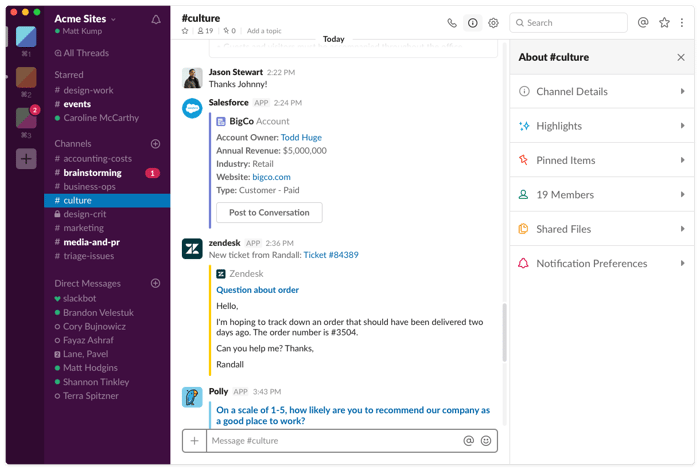 "We are initiating coverage of WORK at Overweight based on the potential to become an automation platform for the middle-office where revenue could eclipse $3B within five years and $10B within ten years," Bracelin wrote in a research note to investors. Though the analyst acknowledges that Microsoft (NASDAQ:MSFT) will be "the primary competitive threat to Slack well into the next decade," he does not believe that the enterprise market will rally completely around Microsoft Teams.

A recent survey of IT execs suggested that Teams was starting to chip away at Slack's position due to its low cost, as Teams is bundled in Office 365.

Goldman Sachs, which was one of the lead financial advisors in Slack's direct listing, has come out with a neutral rating. Analyst Heather Bellini acknowledges Slack's leading position in enterprise collaboration and believes that the company will be able to maintain its leadership. However, Bellini thinks that Slack's current valuation already prices in that dominance. For example, shares currently trade for approximately 38.6 times sales.

The analyst has assigned a $34 price target on Slack, which is around where the stock is currently trading.

"While Slack has emerged as the innovation leader in the team collaboration market, Microsoft has made swift progress to defend their turf on information workers' desktops," he said in a note. "Microsoft recently announced more than 13 million daily active users of its competing Teams solution versus Slack's latest disclosure of 10 million -- meaning Microsoft Teams is at scale, with a compelling product largely comparable to Slack."

Rounding out the new neutral ratings is Credit Suisse, which also cites valuation as a cause for concern. Analyst Brad Zelnick believes that Slack's future success is already baked into the share price. "While we respect Slack's category leadership and disruptive team-centric platform, we see the current valuation balancing much of its future success and risks, most notably MSFT competition," he wrote.

Credit Suisse estimates Slack's addressable market at $39 billion, and with just 2% penetration, it should have "ample runway for growth." The bank recently conducted its own survey of IT execs, and it showed strong top-down interest in Microsoft Teams. Zelnick assigned a price target of $40.