Walt Disney (NYSE:DIS) has every angle in pay television covered except for cable distribution. The company owns popular basic cable channels including ESPN, the ABC broadcast network, and its self-named channels, and it has its own growing streaming services, including Hulu, which offers a live cable-like service.

Being a partner and a competitor puts Disney in a tough position when it has to negotiate carriage deals with cable systems like Charter (which it will have to do in August). The company still wants top dollar for its channels (about $9 per subscriber for the ESPN networks alone) but it also wants expanded rights to use its own content on streaming platforms. 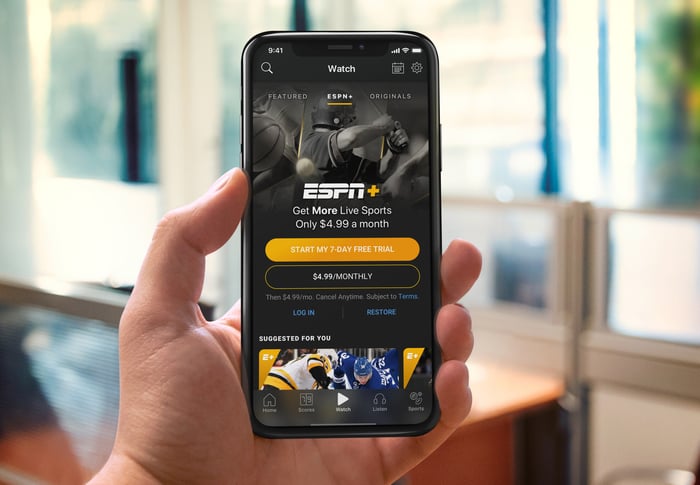 ESPN+ does not carry a feed of ESPN. Image source: Getty Images.

Disney and Charter are like a couple who may not like each other much but stay together because it makes financial sense. In this case, both companies see the writing on the wall and know that a breakup is inevitable, but they also understand that the time for that breakup has not yet arrived.

Charter needs Disney's channels because cable customers -- the ones that are still paying full freight -- want channel bundles with pretty much everything. Streaming services make sense for a person who only has to buy what he or she needs. That becomes a pricier proposition when you need to meet the needs of a family.

Mom may love ESPN for sports while Dad wants to watch comedies on FX and the kids love the Disney-branded cable channels. Disney knows it could enhance Hulu, Disney+, and ESPN+ by offering all of its content, but it has held back from doing that in order to not anger its cable customers.

ESPN+, for example, does not offer a stream of ESPN. Instead it's a hodgepodge of lesser sports, secondary shows, and mixed martial arts content. Disney+ will be the same. It will have all sorts of higher-end original programming, but it won't offer shows from ABC or the company's cable networks until at least a year after they have originally aired.

Hulu, of course, has live TV and ESPN, but the deal allowing for that was made before Disney became the majority owner. That service began with cable/satellite players Comcast and AT&T as partners, which created a sort of exception that opened the door for other live-streaming players.

Charter, of course, would prefer that traditional cable had exclusive access to the Disney channels. But since you can't really put the genie back in the bottle, it's going to try to settle for the status quo while fighting any rate increase.

Will a deal be done?

Charter closed the first quarter with around 16.5 million cable customers. If you assume the vast majority (let's say 16 million) of them have at least basic cable with ESPN, that's $144 million a month in rights fees to Disney just for ESPN alone.

Even Disney won't risk a multibillion-dollar current deal for the promise of eventually making even more money in streaming. The company is building ESPN+, Disney+, and Hulu in case cable truly collapses. That hasn't happened yet. So, for now, this partnership will continue even as both sides not-so-discreetly look at what their options are down the road.