Slack (NYSE:WORK), the cloud-based communication tool for businesses of all sizes that started publicly trading stock on June 20, should be a bit more concerned about its business model today than it was just one week ago. That's because late last week Microsoft (NASDAQ:MSFT) announced that its Slack competitor, Teams, now has 13 million daily active users and 19 million weekly active users.

In contrast, Slack's daily active user count totals about 10 million, according to a regulatory filing from the end of May. Which means that, even presuming that Slack has continued growing since it last disclosed user figures, Microsoft has become a serious threat.

Microsoft drove that point home by creating a graph showing Teams' growth since its release in 2016, compared to Slack's user growth: 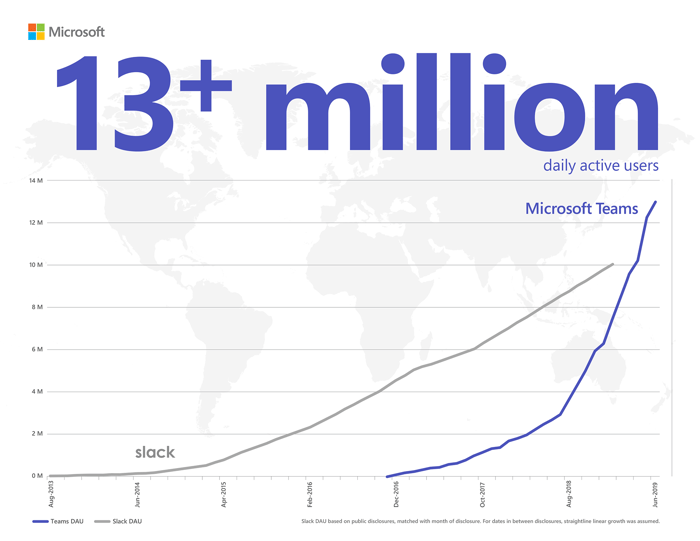 Microsoft's latest announcement should concern Slack and its investors for two key reasons. First, it shows that Microsoft is adept at building valuable cloud-based software that appeals to its customers. And second, it proves that Slack's business has yet to create a sustainable competitive advantage to fend off established tech companies.

Why Slack should be concerned

In response to Microsoft's blog post, Slack CEO and co-founder Stewart Butterfield said that he's not concerned about Teams' growth. He pointed to the fact that Microsoft has spent billions of dollars on Bing to make it a viable competitor with Google in internet search space. And yet it still only attracts about 9% of the market. Essentially, Butterfield believes that just because Microsoft is a large company with lots of money, it doesn't mean that it can beat his company.

But Slack and its investors shouldn't brush Microsoft's latest report aside. The tech giant has rebuilt itself over the past few years as a leading cloud computing player. In the fiscal third quarter, Microsoft's commercial cloud sales grew 41% year over year, and its popular cloud computing platform, Azure, increased its sales 73% from the year-ago quarter.

What does the company's cloud growth have to do with Teams? It's proof that administrators still look to Microsoft for their business software needs, and that means adding Teams into the mix is a logical step for many companies. Enterprise companies looking for a communication tool that's built by one of the most trusted tech companies in the world are turning to Microsoft. The company said back in March that 91 Fortune 100 companies now use Teams.

But the biggest point of concern for Slack investors should be that Teams' rapid growth shows that Slack doesn't yet have a sustainable competitive advantage. 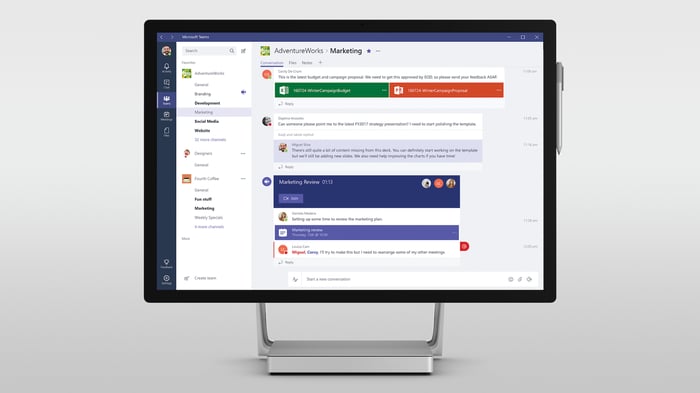 Microsoft was able to create a Slack competitor nearly three years after Slack came into existence, and has since become one of its biggest rivals. It doesn't mean that Slack isn't a great tool or that it can't find a way to beat Microsoft, but it does mean that at this point nothing is stopping Microsoft (or other major tech companies) from creating Slack clones and beating the young company at its own game.

All of the above doesn't mean that Slack is doomed. But shareholders need to keep a close eye on Microsoft Teams' growth compared to Slack's. The young company may shed some light on its daily active user figure when it reports its second-quarter results, likely in September.

Additionally, investors need to remember that the online communication segment that Slack and Microsoft Teams occupy is still in its infancy. Slack could prove to be a great long-term investment, but it's still too early to tell how well it can compete with Teams.

Bottom line: Investors should be cautious before buying Slack's stock, and current shareholders need to keep a close eye on Microsoft.