Silver rose about 2% today to its highest level in four months, closing at $15.67 an ounce. Driving up the precious metal's price was optimism that the U.S. and China will agree to a new trade deal and better-than-expected retail sales numbers. Those two factors suggest the economy could remain healthy, which would boost demand for silver. That rally in the price of silver helped boost the shares of smaller silver miners. 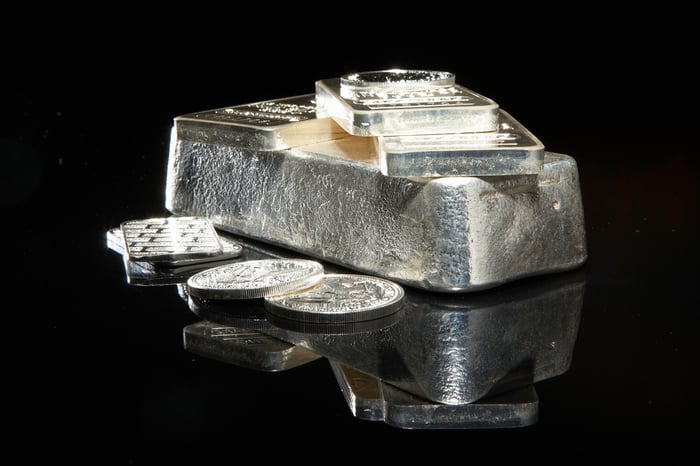 Some silver miners, however, rallied more sharply than their peers thanks to some company-specific catalysts. Fortuna Silver, for example, reported its silver production results yesterday. The company said that its silver output totaled 2.4 million ounces in the second quarter, which was 3% higher than the prior period. That pushed its first-half production 5% above the midpoint of its guidance range, keeping it on track to achieve its full-year target. With silver prices running up, the company is cashing in due to its improving production.

First Majestic Silver also reported its second-quarter production results yesterday. The company's silver-equivalent output totaled 6.4 million ounces, which was up 2% from the prior period. As a result, First Majestic remains on track to achieve its full-year forecast. Like Fortuna, First Majestic is also cashing in on the rally in silver prices by delivering increased silver production.

Finally, Endeavor Silver is rising after it acquired exploration and exploitation rights for two mines in Mexico. The properties are near the company's existing Provenir Norte and Porvenir Cuatro mines, which could enable it to extend those mines. If the company is successful in finding ore at either location, it could be able to commence development this year, which would strengthen its 2019 results.

Silver stocks tend to ebb and flow with the price of silver. Because of that, silver mining stocks can be great buys when the precious metal is in rally mode. That has certainly been the case in recent weeks thanks in large part to the Federal Reserve, which can have a significant impact on silver prices. Add in rising production, and this trio of silver stocks could cash in on improved silver pricing.

However, silver can be quite volatile. That's why investors need to keep a close eye on the factors impacting its price before they buy a silver mining stock. Any change could cause silver to reverse course, taking silver stocks down with it.