Should Domino's (NYSE:DPZ) face up to a difficult truth? As my colleague Dimitri Kalogeropoulos pointed out in his recap of Domino's' second-quarter earnings, the mammoth pizza chain just posted its fifth consecutive quarter of comparable sales decline. While the company is continuing its rapid pace of domestic and international unit growth, "comps" growth has been harder to come by.

Over the last couple of quarters, management has offered up two persuasive candidates as comps headwinds. The first is Domino's "fortressing" strategy, which calls for dense expansion within existing markets to improve proximity to carryout and delivery customers. Fortressing invites cannibalization, in which additional units in a market boost aggregate revenue but make it harder for individual stores to show rising sales (thus hurting the overall company's comparable-store sales metric). 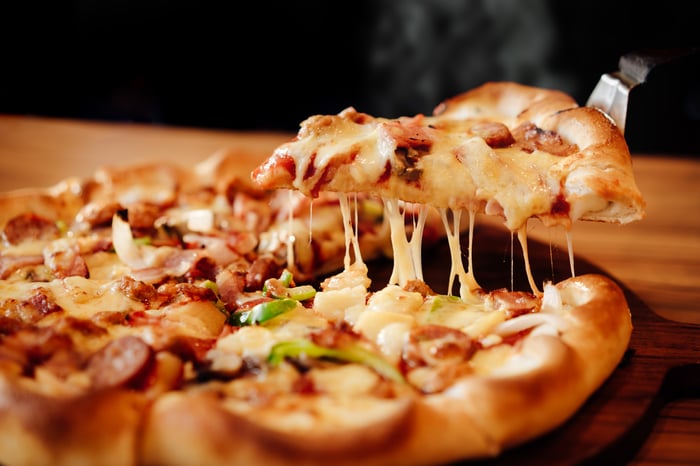 A newer headwind is "the aggressive activity from third-party aggregators," as Domino's management likes to refer to the numerous food delivery platforms that are extending the delivery capabilities of rival pizza chains. In the company's second-quarter earnings conference call, CEO Richard Allison cited significant impact from these aggregators, from their discounting practices in order to snare delivery market share, to heavy advertising in the marketplace, which exerted "downward pressure on [our] share of voice."

I believe this is because the dual headwinds of fortressing and third-party delivery competition may place a lid on comps potential for the foreseeable future. The advent of delivery services like GrubHub, Uber Eats, and a host of smaller competitors is an especially difficult competitive threat to grapple with.

Previously, a customer in the market for food delivery had a limited number of options, with pizza being an obvious, ubiquitous choice. Thus, it may be a fallacy to view the explosion of delivery platforms as simply expanding competition among pizza chains. Rather, Domino's must now compete against restaurants of all stripes. A portion of a market in which pizza chains held captive customers from a lack of viable alternatives is evaporating as delivery companies proliferate.

[H]ow do we drive comps in the future and reaccelerate? The story is going to be fairly similar to what it's gotten this year over the past several years. There's some things that are still going to matter a lot even in this new competitive landscape. We still got to bring great product to our customers each and every day. We are heavily focused on that. We've got to remain intensely focused on value.

The steps above are both reasonable and necessary to improve same-store sales, but the magnitude of their effect may be limited. Would Domino's benefit more by acknowledging to itself and to shareholders that between fortressing and delivery competition, comps may remain stuck in the low single digits for a long while to come?

Doing so might shift the conversation away from a seeming failure to move a once-vibrant metric. It might shift the focus to unit expansion, and the improvement of valuable engines of Domino's earnings, like its owned supply chain from which franchisees source their raw food materials, equipment, and supplies in North America.

I don't mean to fully discount the importance of rising comps. While it may benefit Domino's to hone in on store expansion and margin improvement, franchisees -- at least small ones -- value comps more dearly. Ultimately, higher sales translate into higher store-level cash flow. Larger franchisee groups may have the capital and corporate support to lean on the fortressing strategy to grow their top lines. But Domino's must stay engaged in helping smaller operators improve store-level sales quarter after quarter.

And yet shareholders' frustration with sluggish comps is mirrored in the company's stock: Shares have lost 10% of their value over the last 12 months, despite vigorous revenue and earnings growth. Management -- and shareholders -- might be better served by embracing a broader set of metrics, rather than persisting in trying to double comps against current levels to regain past momentum.