Please ensure Javascript is enabled for purposes of website accessibility
Free Article Join Over 1 Million Premium Members And Get More In-Depth Stock Guidance and Research
By Billy Duberstein - Jul 18, 2019 at 8:20AM

This unheralded segment grew by double digits in an otherwise muted environment for banks.

Banks are beginning to report their second-quarter earnings in a difficult interest-rate environment. Long-term interest rates have already come down, affecting the rates that banks can charge on home mortgages and business loans, while the Federal Reserve has (so far) kept short-term interest rates steady, leading to a flattening yield curve. In anticipation of continued weakness in long-term rates, the largest U.S. bank, JPMorgan Chase ( JPM -1.14% ), recently lowered its full-year earnings estimate slightly for 2019.

However, while the quarter-to-quarter or year-to-year fluctuation in rates garners lots of attention, Foolish long-term investors should be focused on how the underlying business is executing. Competitively advantaged companies such as JPMorgan Chase will continue to do well over the long term, as long as management continues to manage risk while innovating and going after big opportunities. Though JPMorgan's overall revenue only increased 4% year over year, one segment really outperformed, growing a whopping 12%.

Not only that, but the growth in this segment also could benefit other segments in JPMorgan's banking empire. 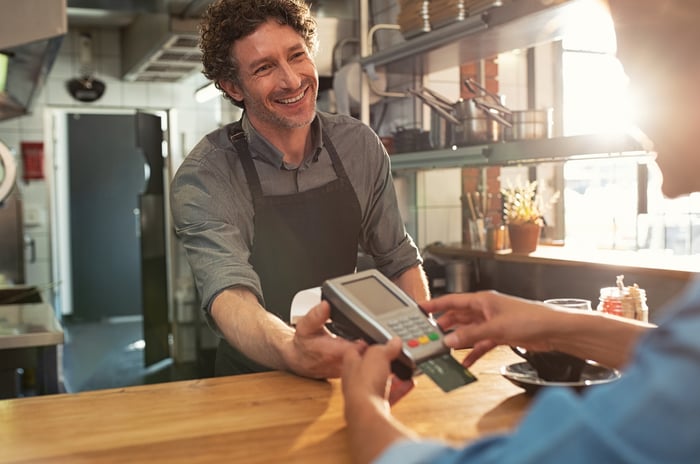 While much of the attention usually falls on banks' home-loan, investment banking, or sales and trading segments, JPMorgan also has its own merchant payment processing and acquiring business. This is unusual, as most banks don't have the size and scale to serve merchants that way, leaving much of this market to giant merchant processing companies that perform only this function.

It wasn't always like this. JPMorgan initially teamed up with First Data Corporation on merchant acquiring and payment processing back in 2006. However, JPMorgan decided to take its merchant processing business in-house back in 2008.

That, today, looks like a smart move. In the recent quarter, JPMorgan's merchant processing volume was up a whopping 12% to $371.6 billion. That's not only greatly outpacing the rest of the bank and the industry at large, but it's also good for the "network effect" on two other parts of JPMorgan's business.

Two other important products for Chase are debit and credit cards -- where it has the No. 1 market share -- and treasury management services for businesses. Having the merchant processing piece helps Chase grow these two segments, in a virtuous cycle.

For instance, Chase recently reintroduced Chase Offers in the fourth quarter of last year. Chase is able to offer discounts to Chase cardholders through select merchants that have business banking and treasury accounts with Chase. These offers result in increased traffic for Chase merchants and volumes processed for Chase, benefiting the bank overall. As a result, JPMorgan's credit card sales were up an impressive 11% last quarter.

On transactions in which a Chase cardholder pays a merchant that uses Chase for business banking, JPMorgan can also offer bigger processing-fee discounts to merchants, giving Chase a competitive advantage against other merchant processors and acquirers. This prospect is especially potent, since Chase has the largest share of credit cards, meaning businesses could save a bundle on higher volumes by going with Chase. In addition, having a single service provider relieves headaches for merchants that would otherwise have to deal with a processor and merchant bank separately.

This allows Chase to compete better against upstart fintechs such as Square, and may also be part of the reason so many payment processors have decided to merge in the first half of this year.

This segment should continue to grow

The U.S. consumer business appears to be doing well right now, as electronic payments continue to take share from cash transactions. Barring a huge recession in which charge-offs may spike, JPMorgan should continue not only riding this wave, but taking share along the way.

While the card, merchant, and auto subsegment only made up about 20% of the company's second-quarter revenue, this consumer income stream is the among the highest-margin segments at the bank. As such, this trifecta of credit cards, merchant services, and treasury management should help keep a floor under JPMorgan's profits, regardless of swings in broader interest rates -- making long-term shareholders very happy indeed.